Saboor celebrates her birthday with friends and family 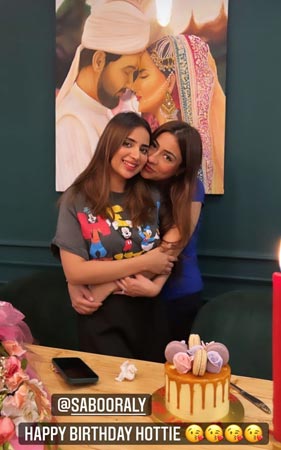 Birthday bashes are a lavish affair for anyone and everyone but when it comes to celebrities, they take the celebration on another level altogether. Saboor Aly turned 27 this week. An enthusiastic performer who has been making waves in showbiz, Aly has managed to garner ample praises for herself in a short span of time. Sharing snippets from the night, the Bhool star shared some pictures from the intimate celebration. Many celebrities like Ali Ansari, Mariam Ansari, Owais Khan, Sadia Ghaffar and Sara Ali were spotted at the Parizaad actor’s birthday. However, Ali and Saboor are under fire as immense backlash and endless trolling is being directed towards them due to their PDA-filled romance at the latter’s birthday. On the work front, Saboor has been riding high on the success of her drama serial Amanat which won her a lot of praise from the masses for her negative portrayal.