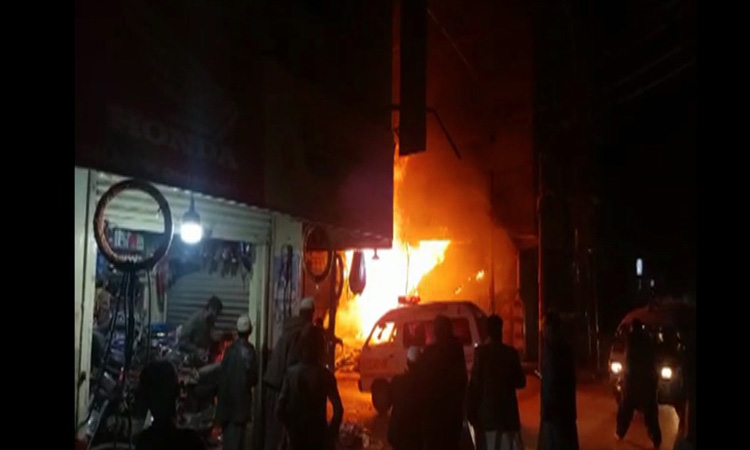 Three people, including a deputy superintendent of police (DSP), lost their lives while more than 20 others sustained injuries as an explosion took place at Quetta’s Jinnah Road.

According to a private TV channel, the blast took place near a police mobile and soon after the explosion, nearby shops caught fire. Deputy Inspector-General (DIG) Quetta Fida Hussain said that all the wounded individuals have been shifted to Quetta’s Civil Hospital. He also confirmed that one of the deceased was a DSP. Hassan further revealed that an improvised explosive device (IED) was used in the blast. “Two-and-a-half to three kilogrammes of explosives were used in the blast,” he said.

The medical superintendent of the hospital said that the number of injured brought in for treatment was 25, adding that the condition of six individuals was critical. According to the police, following the incident, Jinnah Road and its surrounding streets were cordoned off and had been closed for traffic.

Balochistan Chief Minister Mir Abdul Qudoos Bizenjo, in a statement, strongly condemned the incident. He also directed hospitals to impose an emergency and for all doctors and paramedical staff to ensure their presence. “Cowardly terrorists targeted innocent citizens in a terrorist attack,” he said. “Efforts are being made to disrupt peace in Quetta and the province under a planned and well-thought-out conspiracy.” The chief minister said terrorists and their sponsors were receiving “external support”, directing the IG to submit a detailed report of the incident. “All resources should be utilised to bring those responsible for the incident to justice,” the chief minister said in his directives, also telling officials to make security arrangements in the city more effective.

Sindh Governor Imran Ismail also strongly condemned the Quetta blast and extended condolences to the families of those killed in the blast. He also prayed for the speedy recovery of the injured.

Meanwhile, Karachi Administrator Murtaza Wahab prayed for those killed and injured in the incident. “Terrible news coming from Quetta,” he said on Twitter.

There has been an uptick in violence in Balochistan with several attacks and explosions reported since the start of the year. Likewise, Chief Minister Punjab Usman Buzdar also condemned the incident and said that “a handful of terrorists cannot shake the resolve of the nation.”

Case registered against unknown persons: sources According to sources, a case has been registered against unknown persons for carrying out the attack at the Counter-Terrorism Department (CTD) police station. The case has been registered under several sections, including murder, attempt to murder, and terrorism, sources said. Last month, at least 13 terrorists were killed and seven security personnel, including an officer, martyred during armed attacks on two security forces’ camps in the province’s Naushki and Panjgur districts.