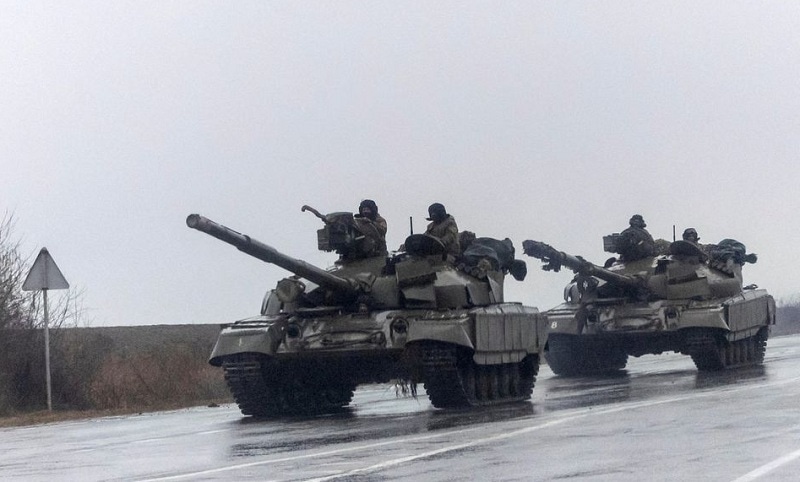 Street fighting broke out in Ukraine’s second-largest city and Russian troops squeezed strategic ports in the country’s south on Sunday, advances that appeared to mark a new phase of Russia’s invasion following a wave of attacks on airfields and fuel facilities elsewhere in the country.

Following its gains on the ground, Russia sent a delegation to Belarus for peace talks with Ukraine, according to the Kremlin. Ukraine’s president suggested other locations, saying his country was unwilling to meet in Belarus because it served as a staging ground for the invasion.

Until Sunday, Russia’s troops had remained on the outskirts of Kharkiv, a city of 1.4 million about 20 kilometres south of the border with Russia, while other forces rolled past to press the offensive deeper into Ukraine and Ukrainian fighters put up determined resistance.

“The past night was tough — more shelling, more bombing of residential areas and civilian infrastructure. There is not a single facility in the country that the occupiers wouldn’t consider as admissible targets.”

Videos posted on Ukrainian media and social networks showed Russian vehicles moving across Kharkiv and Russian troops roaming the city in small groups. One video showed Ukrainian soldiers inspecting Russian light utility vehicles damaged by shelling and abandoned by Russian troops on a street. Huge explosions lit up the sky early on Sunday near the capital, Kyiv, where terrified residents hunkered down in homes, underground garages and subway stations in anticipation of a full-scale Russian assault.

But Ukrainians also volunteered en masse to help defend Kyiv and other cities, taking guns distributed by authorities and preparing firebombs to fight Russian forces. Zelenskyy denounced Russia’s offensive as “state terrorism.” He said the attacks on Ukrainian cities should be investigated by an international war crimes tribunal and cost Russia its place as one of the five permanent members of the United Nations Security Council.

“Russia has taken the path of evil, and the world should come to depriving it of its UN Security Council seat,” he said.

Officials maintained a 39-hour curfew to keep people off the capital’s streets until Monday morning, complicating the task of assessing the intensity of the fighting. Zelenskyy’s office said explosions were reported at Kyiv International Airport. Flames billowed from an oil depot near an airbase in Vasylkiv, a city 37km south of Kyiv where there has been intense fighting, according to the mayor. Russian forces blew up a gas pipeline to the east in Kharkiv, prompting the government to warn people to cover their windows with damp cloth or gauze as protection from smoke, the president’s office said.

Meanwhile, Moscow also claimed today that its troops had “entirely” besieged the southern Ukrainian city of Kherson and the city of Berdyansk in the southeast. “Over the past 24 hours, the cities of Kherson and Berdyansk have been completely blocked by the Russian armed forces,” defence ministry spokesman Igor Konashenkov said in a statement carried by Russian news agencies.

More than 150,000 Ukrainians fled for Poland, Moldova and other neighbouring countries, and the United Nations warned the number could grow to four million if fighting escalates. President Vladimir Putin hasn’t disclosed his ultimate plans, but Western officials claim he is determined to overthrow Ukraine’s government and replace it with a regime of his own, redrawing the map of Europe and reviving Moscow’s Cold War-era influence.

To aid Ukraine’s ability to hold out, the US pledged an additional $350 million in military assistance to Ukraine, including anti-tank weapons, body armour and small arms. Germany said it would send missiles and anti-tank weapons to the besieged country and that it would close its airspace to Russian planes.

Ukraine also lodged a complaint against Russia at the International Court of Justice (ICJ) in The Hague to get it to halt its invasion. Russia must be held accountable for manipulating the notion of genocide to justify aggression,” Zelensky declared in a tweet.

“We request an urgent decision ordering Russia to cease military activity now and expect trials to start next week.”

The ICJ, which is based in the Netherlands capital The Hague, does not have a mandate to bring criminal charges against individual Russian leaders behind the four-day-old invasion. But it is the world’s top court for resolving legal complaints between states over alleged breaches of international law. It is the supreme judicial institution of the United Nations.

The US, European Union and the United Kingdom agreed to block “selected” Russian banks from the SWIFT global financial messaging system, which moves money around more than 11,000 banks and other financial institutions worldwide, part of a new round of sanctions aiming to impose a severe cost on Moscow for the invasion. They also agreed to impose ”restrictive measures” on Russia’s central bank.

It was unclear how much territory Russian forces had seized or to what extent their advance had been stalled. Britain’s Ministry of Defense said, “the speed of the Russian advance has temporarily slowed likely as a result of acute logistical difficulties and strong Ukrainian resistance.”

A senior US defence official said more than half the Russian combat power that was massed along Ukraine’s borders had entered the country and Moscow has had to commit more fuel supply and other support units inside Ukraine than originally anticipated.

The official spoke on the condition of anonymity to discuss internal US assessments.

The curfew forcing everyone in Kyiv inside was set to last through Monday morning. The relative quiet of the capital was sporadically broken by gunfire.

Fighting on the city’s outskirts suggested that small Russian units were trying to clear a path for the main forces. Small groups of Russian troops were reported inside Kyiv, but Britain and the US said the bulk of the forces were 30 kilometres from the city’s centre as of Saturday afternoon.

Russia claims its assault on Ukraine from the north, east and south is aimed only at military targets, but bridges, schools and residential neighbourhoods have been hit.

Ukraine’s health minister reported on Saturday that 198 people, including three children, had been killed and more than 1,000 others wounded during Europe’s largest land war since World War II. It was unclear whether those figures included both military and civilian casualties.

A missile struck a high-rise apartment building in Kyiv’s southwestern outskirts near one of the city’s two passenger airports, leaving a jagged hole of ravaged apartments over several floors. A rescue worker said six civilians were injured. Ukraine’s ambassador to the US, Oksana Markarova, said troops in Kyiv were fighting Russian “sabotage groups.” Ukraine says some 200 Russian soldiers have been captured and thousands killed.

Markarova said Ukraine was gathering evidence of shelling of residential areas, kindergartens and hospitals to submit to The Hague as possible crimes against humanity.

Zelenskyy reiterated his openness to talks with Russia in a video message, saying he welcomed an offer from Turkey and Azerbaijan to organize diplomatic efforts, which so far have faltered.

The Kremlin confirmed a phone call between Putin and Azerbaijani President Ilham Aliyev but gave no hint of restarting talks.

Putin sent troops into Ukraine after denying for weeks that he intended to do so, all the while building up a force of almost 200,000 troops along the countries’ borders.

He claims the West has failed to take seriously Russia’s security concerns about Nato, the Western military alliance that Ukraine aspires to join. But he has also expressed scorn about Ukraine’s right to exist as an independent state.

The effort was already coming at great cost to Ukraine, and apparently to Russian forces as well. Ukrainian artillery fire destroyed a Russian train delivering diesel to troops heading toward Kyiv from the east, said Anton Gerashchenko, an adviser to the interior minister.The country’s Infrastructure Ministry said a Russian missile was shot down early Saturday as it headed for the dam of the sprawling reservoir that serves Kyiv.

The government also said a Russian convoy was destroyed. Video images showed soldiers inspecting burned-out vehicles after Ukraine’s 101st brigade reported destroying a column of two light vehicles, two trucks and a tank. The claim could not be verified.

Highways into Kyiv from the east were dotted with checkpoints manned by Ukrainian troops and young men in civilian clothes carrying automatic rifles. Low-flying planes patrolled the skies, though it was unclear if they were Russian or Ukrainian.

In addition to Kyiv, the Russian assault appeared to focus on Ukraine’s economically vital coastal areas, from near the Black Sea port of Odesa in the west to beyond the Azov Sea port of Mariupol in the east.

Ukrainian soldiers in Mariupol guarded bridges and blocked people from the shoreline amid concerns the Russian navy could launch an assault from the sea.

“I don’t care anymore who wins and who doesn’t,” said Ruzanna Zubenko, whose large family was forced from their home outside Mariupol after it was badly damaged by shelling.

“The only important thing is for our children to be able to grow up smiling and not crying.”

Fighting also raged in two eastern territories controlled by pro-Russia separatists. Authorities in Donetsk said hot water supplies to the city of about 900,000 were suspended because of damage to the system by Ukrainian shelling. The US government urged Zelenskyy early on Saturday to evacuate Kyiv but he turned down the offer, according to a senior American intelligence official with direct knowledge of the conversation. Zelenskyy issued a defiant video recorded on a downtown street, saying he remained in the city.

“We aren’t going to lay down weapons. We will protect the country,” he said. “Our weapon is our truth, and our truth is that it’s our land, our country, our children. And we will defend all of that.”

Hungary and Poland both opened their borders to Ukrainians. Refugees arriving in the Hungarian border town of Zahony said men between the ages of 18 and 60 were not being allowed to leave Ukraine. “My son was not allowed to come. My heart is so sore, I’m shaking,” said Vilma Sugar, 68.

At Poland’s Medyka crossing, some said they had walked for 15 miles (35km) to reach the border. “They didn’t have food, no tea, they were standing in the middle of a field, on the road, kids were freezing,” Iryna Wiklenko said as she waited on the Polish side for her grandchildren and daughter-in-law to make it across.

Officials in Kyiv urged residents to stay away from windows to avoid debris or bullets. Shelves were sparsely stocked at grocery stores and pharmacies, and people worried how long food and medicine supplies might last. The US and its allies have beefed up forces on Nato’s eastern flank but so far have ruled out deploying troops to fight Russia. Instead, the US, the European Union and other countries have slapped wide-ranging sanctions on Russia, freezing the assets of businesses and individuals including Putin and his foreign minister.

“There is no particular need in maintaining diplomatic relations,” Medvedev said. “We may look at each other in binoculars and gunsights.”