‘Death On the Nile’ banned in Lebanon and Kuwait

* Given her connection to the IDF, Lebanon previously blocked the actress' movie 'Wonder Woman' from release in May 2017 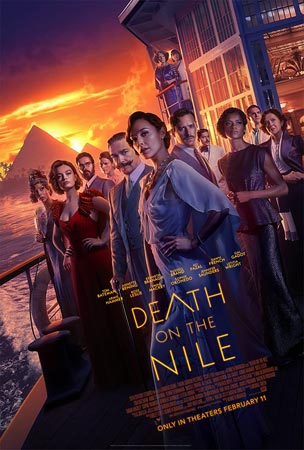 Lebanon and Kuwait won’t be playing Death on the Nile, Deadline has confirmed, and that’s unfortunately due to both countries’ protest of Israeli native star Gal Gadot.

Gadot served in the Israeli military for two years prior to becoming a model and actress, as her native country mandates it.

Given her connection to the IDF, Lebanon previously blocked the actress’ movie Wonder Woman from release in May 2017. At the time, the country was reportedly prompted to do so by the group Campaign to Boycott Supporters of Israel-Lebanon. Wonder Woman was also banned in Qatar. Wonder Woman 1984 was banned in Lebanon as well, however, at the time Kuwait theatres were closed at that point in time during the pandemic.

‘Death on the Nile’ is being released in the rest of the Middle East as of this weekend. No requests were made by Lebanon or Kuwait for any edits to the print.

The Daily Mail, which first had the news about Death on the Nile’s ban in Kuwait, cited the local Al-Qabas newspaper saying that country caved into a ban of the Kenneth Branagh directed Agatha Christie adaptation due to protests on social media. The newspaper also quoted a country official source saying that they would not book a movie starring a former solider in the Zionist occupying army.

In May 2021, Gadot disabled Twitter comments over a tweet about the Israel-Hamas rocket attacks conflict. What was meant as a message of unity by the actress, was perceived by critics as propaganda for Israel. Gadot left the post up, which you can read below.

Meanwhile, Death on the Nile is one of the few US movies to receive a release in China after several notable Hollywood movies went undated last year. All notable offshore territories are going day-and-date for the film this weekend with the exception of Spain and Japan as well as Hong Kong, Croatia and Hungary.

Death on the Nile is expected to be No. 1 at the weekend domestic box office with a take in the mid-teens.