Identity crisis in Pakistan  I

The post-colonial state of
Pakistan is faced with identity-related challenges, and is struggling to define its identity, particularly from the onset of the 9/11 attacks on the United States. Parallel movements are running across the landscape of Pakistan, as some demand an Islamic state, some a multinational state, some fight for a secular one, and some a democratic Islamic republic, and if Islamic state, again beset with complexity as to what type of Islamic state — Shia or Sunni — Pakistan should be and to what degree. In between, the issue of minorities in the Pakistan state is central to the identity debate currently going on in Pakistan. But the country is repeatedly failing to define it under complex pressures from both within and without. The nature of the post-colonial state’s identity can be understood through different parameters of religious versus secular identity, inter-religious and intra religious identity, communal identity, central versus provincial identity, ethnic identity, and by the construct of majority versus minority identity and their relations and effect on the state and society, which in turn describe the nature of the post-colonial state of Pakistan’s identity in general.

Since its birth Pakistan has undergone an identity crisis and the contested versions of the religious nature of the post-colonial state in large part explain its history of instability, fragmentation and power abuse. From 1947, especially after the death of Mohammad Ali Jinnah in 1948, the question was of whether Pakistan was intended to be an Islamic state that favoured Muslims, or a Muslim nation state that would guarantee the equality of all its citizens. The freedom struggle left the question unresolved whether Pakistan should be run on secular lines or Islamic. Indeed the debate about Islam’s role in Pakistanis’ public life still rages after over a half a century since independence. Equally contested is the relationship between Pakistani nationalism and ethnic and linguistic allegiances, of which the latter were partially submerged during the freedom struggle.

The problem started with the Objectives Resolution, which defined Pakistan both as an Islamic republic as well as a democratic and federal state. On the one hand, government was established on the basis of Westminster-style parliamentary democracy, and on the other, all sovereignty was declared in the hands of the Almighty. The Objectives Resolution was interpreted by both modernists and traditionalists in their own way, and the ulema (clergy) demanded a bigger role in the law-making process from and for the state. This was one of the reasons for the failure of civilian governments in Pakistan in its earlier phase. They played an immense role in shaping Pakistan’s identity and its reflection manifested from time to time. All constitutions of the state described Pakistan as an Islamic republic. The manifestation of the Islamic identity in the constitution was kept alive by the blasphemy laws, which have recently become highly controversial in Pakistan. This Islamic identity of the post-colonial Pakistan has brought havoc on both inter-religious minorities and outer-religious ones. The inter-religious minorities means minority groups like the Shias or Ahmedis; while the former are continuously struggling to maintain their separate Islamic identity under the Sunni-dominated Muslim state, the latter were declared as non-Muslims in 1974, during Zulfiqar Ali Bhutto’s regime through the 2nd Amendment to the constitution.

The claims of purity and ownership by one group create alienation in another, leading to violence. Thus Pakistan is engulfed with religious intolerance and communal violence. The rift between Shias and Sunnis was there earlier too, but from the 1970s rivalry and conflict got spurred and aggravated due to lack of a properly defined identity of the state. Sunnis often claim that it is ‘their’ country, and they try to suppress the rights of other groups. The seeds of Islamisation were innate to Pakistan, but flourished particularly during the reign of General Ziaul Haq. However, it was only under the reign of Mian Nawaz Sharif and Benazir Bhutto that sectarian violence increased between the Shias and Sunnis. Atrocities had already been visited on the Ahmedis during the 1950s.

Every second day people die on roads, public places and mosques due to suicide bombings. The identity issue has reached such a level that the state seems to have been paralysed, unable to solve it. The Islamists have taken a revolutionary stand to defend the constitutional Islamic laws. For instance, in January 2011, the governor of Punjab, Salmaan Taseer, was killed by his bodyguard, Mumtaz Qadri, who said he was angered by Mr Taseer’s support for amendment of the blasphemy law. Although there were large scale protests against his assassination, yet the impotence of the government was evident in January 2011 when the Pakistan People’s Party’s Member of Parliament Sherry Rehman dropped her attempt to amend the blasphemy laws, accusing her party “of appealing to extremists by ruling out any changes to the law.”

The last democratic government remained unable to control it. Often the state is viewed as pro-Sunni and anti-Shia, and although government justifies certain bans on Shia processions during Moharram on considerations of instability, yet the question remains why only the Shia community has to face these restrictions, and why there is so much internal religious interference?

The post-colonial state has become biased towards different sections of society and has more and more of a Sunni character. The identification of the state with the particular Sunni theology is a dangerous trend and remains a stimulant factor for religious or communal disturbances and dissatisfaction of the Shia community. The obvious trend is that the Shias of Pakistan identify themselves more with Iran and less with Pakistan, and that even for holy matters Saudi Arabia has minuscule importance for the Shias.

The writer is a student of M.phil South Asian studies, Jawaharlal Nehru University, New Delhi and can be reached at mnazar00@gmail.com 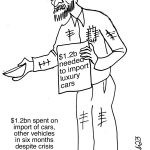