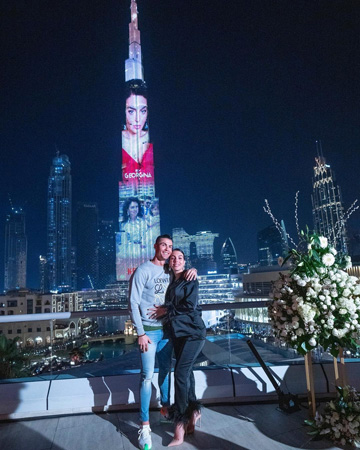 The star player, Cristiano Ronaldo celebrated the 28th birthday of his girlfriend, model Georgina Rodríguez on Thursday with a grand surprise in Dubai. The 36-year-old footballer illuminated the world’s tallest building with his girlfriend’s face.

Cristiano Ronaldo got a custom laser show with clips from his partner’s last Netflix series ‘I Am Georgina’, with a wish saying “Happy Birthday Gio”. He managed to gather his four kids as well for the occasion.

The footballer took to photo and video sharing application Instagram to share a clip from the laser show, “Muitos parabéns meu amor”, translating to ‘Happy Birthday my love’, read the caption with the video which has been watched by 36 million users of the app and counting.

Later, overwhelmed Rodríguez penned a heartfelt acknowledgment for beau on Instagram, with an eight-picture gallery from the day, featuring the family of six.

Reports from an international portal suggest that “The iconic tower becomes the biggest display screen in the world at night, with recent reports putting the cost of placing a three-minute promotional ad or message on the tower’s facade at a minimum of 50,000 pounds, a price that subsequently rises at weekends.”