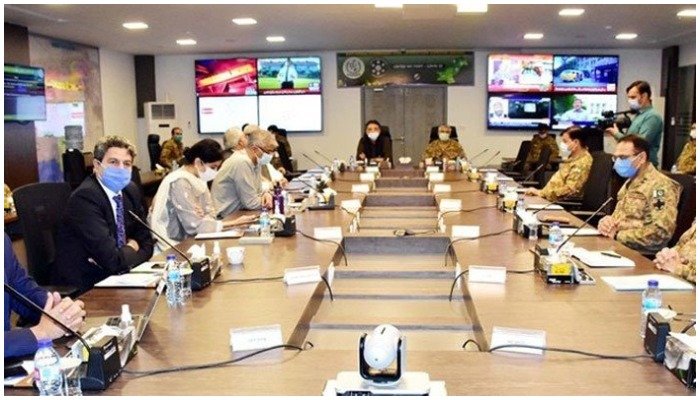 ISLAMABAD: After analyzing the current coronavirus situation in the country in a meeting today, the National Command and Operations Centre (NCOC) is likely to make a decision about school closures as a preventive measure amid the hazardous spike in COVID-19 infections (Monday).

Over the weekend, the forum called a meeting and requested federal and provincial health and education ministers to propose a new set of rules to cope with the country’s growing coronavirus crisis.
In today’s meeting, a new set of SOPs will be presented, with an emphasis on schools and the education sector in general, public gatherings, marriage ceremonies, indoor/outdoor dining, and the transportation sector.

The meeting will deliberate on ways and means to prevent the spread of coronavirus in schools, colleges, and universities.

The decision to extensively engage with provinces, especially with the Sindh government, was made in the last NCOC meeting on Saturday for necessary measures to tackle the rising coronavirus numbers.

Meanwhile, Punjab health minister Yasmin Rashid said that they do not favor the closure of schools. “We don’t want the schools shut since education has already suffered enough,” Rashid said.
She said that Punjab has vaccinated 80% of its students in schools and colleges.

Talking about the fast approaching Pakistan Super League 2022, the minister said NCOC is to decide on whether it will allow spectators at the venues or not.

‘Pressure on hospitals can increase any time’

Furthermore, Pakistan Medical Association Secretary General Dr Qaiser Sajjad stated that the demand on hospitals could escalate at any time because to the rapid spread of Omicron throughout the country, particularly in Karachi.

“We weren’t strict in the last four waves of coronavirus, but we need to be strict this time,” Dr. Sajjad said, adding that wedding halls and restaurants will be closed and gatherings will be limited.
While the fifth wave of coronavirus has wreaked havoc across the country, the situation in Karachi is deteriorating by the day, with the positive rate in the city approaching 40% a day earlier and a further rise projected this week.

The scenario in Karachi is projected to alter in the coming week, according to federal health officials, as the positive ratio may reach 50%, resulting in an increase in hospitalizations.
Officials also predicted that daily instances would increase to 6,000.

Sindh Chief Minister Murad Ali Shah, on the other hand, has stated that the decision to impose a lockdown and close educational institutions will be made in accordance with the recommendations of the NCOC.

The coronavirus cases were spreading quickly, but the situation was under control, according to CM Shah, because hospitalizations and patients in critical care units (ICU) in the port city were low.

Meanwhile, 4,340 new COVID-19 cases were reported in Pakistan in the last 24 hours, bringing the total number of active cases to 35,884, with seven deaths bringing the death toll to 29,019, according to NCOC data.