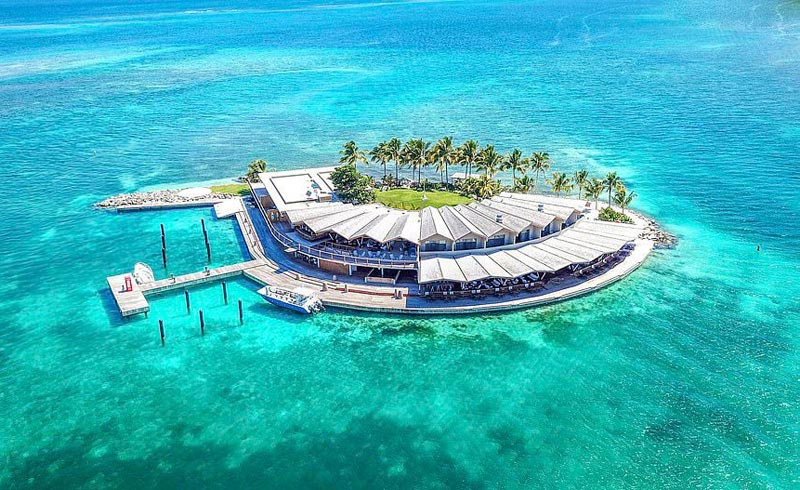 In September 2017, Hurricane Irma – the strongest ever recorded in the Atlantic Ocean, with wind gusts reaching 215mph – ripped through this chain of lush islands, leaving them scorched and bare.

When the winds died down, more than 80 percent of buildings on the BVIs’ main island of Tortola were found to have been destroyed or seriously damaged and its vital tourist industry was decimated.

The immediate aftermath that agriculturalist Vernon Daniel describes is apocalyptic, but it also explains how the BVIs soon bounced back from such devastation. He says: ‘Salt from the ocean came in with the wind and burnt everything. All the trees were like bonsais, cut to half their size. But a lot of the soil was saturated with salt and that helped with the absorption of rain, so it was actually all green again within three months, completely naturally.’

A massive clean-up operation was launched to tackle the £2.7 billion of damage, with extensive rebuilding and the establishment of new farms to ensure the self-reliance of this British Overseas Territory just to the east of Puerto Rico.

Now, the much needed and long-awaited tourists are back and finding an even warmer welcome. Regular visitors will see big changes across the islands – even though they appear just as green as before, carpeted in cactus-studded rainforest and exotic flowers, the beaches seem to sparkle more than ever.

‘When a hurricane comes through, the beaches change and are refreshed,’ says Keith Dawson of the BVI Tourist Board. ‘Everything gets a clean-up. There weren’t as many boats around so fish are in abundance and people are farming more in their gardens. It’s a very hopeful time.’

With calm currents, reliable trade winds and countless deserted coves, the BVIs have long attracted keen sailors and celebrities who hop between the 60 islands, islets and cays.

But the new and refurbished hotels also make the islands a dream getaway for those who prefer to stay on dry land – and a tranquil alternative to tourist-heavy Antigua, an hour’s flight away.

Visit between December and April and you will steer clear of the Caribbean’s hurricane season, though stricter new building regulations should mean the islands remain better protected in future.

On Virgin Gorda, the second-largest island, Rosewood Little Dix Bay was already one of the region’s most prestigious properties. Founded by American philanthropist Laurance Rockefeller in the 1950s and frequented by the Queen and Duke of Edinburgh, a four-year closure has seen it almost entirely rebuilt, with a blissful hilltop spa, treehouse suites and beachfront cottages along half a mile of white sand.

Guests can dabble in free non-motorised watersports or just lie back and spot the hawksbill turtles emerging for air just yards from the water’s edge.

Some tiny coves can be reached only by clambering over the boulders with rope ladders for a real desert-island feel.

New businesses are flourishing too, such as two-room floating Ocean Spa built out of timber salvaged from Irma’s wreckage and now anchored in postcard-perfect White Bay. For one-stop souvenir shopping in Road Town, Tortola’s capital, the charming gift shop and gallery Nutmeg sells the creations of local artists and craftspeople who lost everything in the hurricanes.

Even old favourites have had a complete makeover. The tiny yachting hot-spot island resort Saba Rock clings to a one-acre rocky outcrop and was flattened by Irma. It finally reopened in October 2020 with seven stylish rooms and two suites, two bars and an open-air restaurant that has already welcomed Sir Richard Branson from his home on neighbouring Necker Island.

Elsewhere, eco-wellness retreat The Aerial has thrown open its doors for the first time on unspoilt private Buck Island. Teetering on a cliff in Sir Francis Drake Channel, it overlooks 14 surrounding islands including Dead Chest Island, said to be the spot where notorious pirate Blackbeard marooned 15 of his mutinous crew with just a bottle of rum each.

Visitors to The Aerial fare considerably better, with a maximum of 28 guests free to explore 48 acres of forested hiking trails, a private beach, an infinity pool and a recording studio. There are also yoga sessions, healthy, communal meals and guided group sessions in everything from meditation to financial management. Those yearning for all-out luxury can even hire the island in its entirety for the ultimate getaway at £30,500 per night with a minimum three-night stay

Most tourists tend to stay on Tortola, though. Home to both Road Town and the main airport, it is the busiest and liveliest island with good restaurants and a thriving sailing scene.

Yet it still feels blissfully underdeveloped, with no chain stores, very little crime and a population of only 23,000.

Cheaper accommodation options include Maria’s by The Sea in the heart of Road Town and Sebastian’s by The Beach.

Now a brand-new, delightfully laid-back boutique resort has emerged in its place, with 20 whitewashed suites opening directly on to the beach, a thatched cocktail bar and an open-air restaurant, with plans for a spa and hillside rooms to follow.

This is also the best place to try the BVIs’ national dish of fish and fungi – red snapper with okra and cornmeal – which was originally made from slavery rations in the 17th Century.

First settled by the Dutch, Tortola was captured by the British in 1672 at the start of the Third Anglo-Dutch War. Though the two countries signed a treaty promising to return all land gained during the war, Tortola remained under British rule, settled by plantation owners growing cotton and sugar who relied on slave labour.

Today, the island’s turbulent story is told by a handful of historical buildings clustered around the capital, and along the coast are the ruins of St Philip’s Anglican Church in Kingstown, one of the earliest churches built in the Caribbean for liberated slaves.

Leave Road Town behind and head into the mountains for the best views of Tortola’s glittering curvy coastline. Marine biologist Mervin Hastings leads groups through the leafy depths of Shark Bay National Park, pointing out medicinal plants, orchids, dragon fruit cacti and even the right sort of termite that will keep you alive should you become stranded in the jungle.

Scramble up the boulder on the ridge to reach a yawning cave full of nesting bats and concealing a sheer drop into the Atlantic Ocean where you might spot migrating humpback whales.

Even the most determined landlubber should try to get out on the water to really see the BVIs at their best. Unlike Barbados and Saint Lucia, island-hopping is a way of life here. It’s easy to jump on a water taxi or ferry for lunch on one island, drinks and snorkelling on a second and dinner on yet another. To choose your own schedule, charter a crewed boat from The Moorings and then head off to wherever takes your fancy.

Sleepy Anegada is known to serve the best lobster in the Caribbean; Norman Island is said to have been the inspiration for Robert Louis Stevenson’s Treasure Island; and mile-long Salt Island has a 19th Century steamer wreck for diving, as well as a Salt Lake from which Queen Elizabeth is given a pound of salt each year as annual rent.

There are picnic spots and secluded beaches aplenty on the way, but be sure to drop anchor by idyllic Jost Van Dyke, where Main Street is a palm-lined sandy beach track. Just four miles by three and with only 300 residents, the island was named after a Dutch pirate and is a must-visit for dolphin-watching and barefoot beach bars.

Its legendary Soggy Dollar bar can be reached only by swimming, so earned its name from the waterlogged banknotes that staff pin up behind the bar to dry. Although it was almost completely destroyed by Irma, and its adjoining bedrooms no longer exist, the bar itself has been rebuilt and is just as lively as before.

When you arrive, dry off in a hammock, then order a Painkiller cocktail – a mix of dark rum, cream of coconut, pineapple and orange juice topped with fresh grated nutmeg that originated here in the 1970s but is now copied everywhere.

It’s the very best way to toast the fact that the British Virgin Islands are well and truly open for business again.