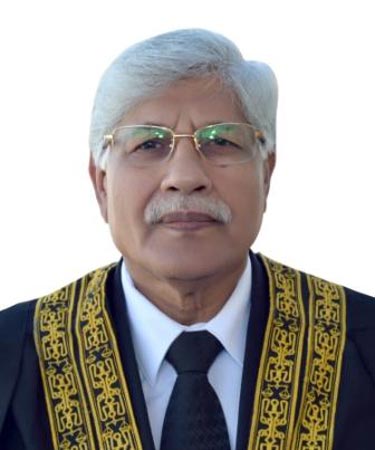 The Islamabad High Court (IHC) Friday said the affidavit that accused former chief justice of Pakistan Saqib Nisar of manipulating cases against the PML-N Quaid and former premier Nawaz Sharif appeared to be an attempt to influence the proceedings and obstruct and interfere with the due administration of justice.

Chief Justice Athar Minallah made these remarks in a 12-page ruling authored by him in a contempt of court case against former top judge of Gilgit-Baltistan Rana Muhammad Shamim, a senior journalist, resident editor and editor-in-chief of a national daily.

“The questionable contents of the affidavit, the timing, the place of its execution and then its mysterious leak followed by a hasty publication had likely profound consequences for the proceedings pending before the court relating to the appeals preferred by the two persons named therein, says a news report.

“The publication and the contents of the affidavit could be prejudicial to the right of fair trial of the two potential beneficiaries named therein and whose appeals were pending and fixed for hearing on 17-11-2021,” the IHC CJ added.

“The notion of the alleged contemnors that a document in the form of an affidavit has evidentiary value even though not part of any judicial record, is misconceived,” it said, adding that the most important aspect relates to the right to the fair trial of the two potential beneficiaries, Nawaz Sharif and Maryam Nawaz, named in the affidavit.

“They were the potential beneficiaries and their appeals were fixed for hearing two days after the date of publication i.e. on 17-11-2021. They have not owned the document. The publication could have been considered capable of influencing the outcome of their appeals. Their right to a fair trial was likely to be prejudiced. The contents of the document and its publication had the likely effect of creating a perception of their indirect involvement to pressurize the Court or influence the outcome of the appeals through a ‘media trial’ without their knowledge or consent.”

The “freedom of expression does not license a journalist or a publisher even inadvertently or unintentionally to facilitate influencing of pending proceedings or casting aspersions on judges in the garb of an affidavit which does not form part of any judicial proceedings,” Justice Minallah wrote. “Freedom of expression is not an absolute right and for a journalist it carries with it responsibilities and duties. This Court is mindful of the paramount importance of guarding free press and freedom of expression and it is manifested by its judgments,” the ruling further maintained.

However, it said that the rights of litigants are equally important and attempts to interfere with “due administration of justice” are not covered under the freedom of expression.

About the decision to frame contempt charges against the accused, the IHC CJ said that the said law didn’t protect the judges as it was aimed to ensure a fair trial. “The sub judice rule i.e. no one should interfere with legal proceedings which are pending, is an established exception to the freedom of expression,” he added.

“The alleged contemnors appear to believe that as ‘messengers’ they have absolute freedom…While jealously guarding freedom of expression and free press, it is the simultaneous duty of the Court to protect…the right to a fair trial of the litigants and their confidence in the due administration of justice,” the ruling added.

“Admittedly, the document was not part of any judicial record…no attempt was made by a reputable professional investigative journalist to verify the material facts from the Registrar of this Court, inter-alia, whether the honourable Judge named therein had been performing judicial functions or was on leave and whether he was one of the members of the Bench constituted during the relevant period.”

Justice Minallah said the stance taken by the two journalists that publishing the document was in the public interest did not align with the international practices in the field of journalism.

“It does not appear to be the function of a professional journalist to determine the factor of ‘public interest’ and then publish a document having no evidentiary value. By taking this stance they have also implied that the contents of the document were true because otherwise, in the public interest, the news report would not have been published,” the ruling added.

“It cannot be presumed on the basis of the professional repute and stature of the reporter, editor and chief-editor that they were oblivious of the high profile proceedings pending before the Court and the likely consequences in the context of obstruction and interference with the administration of justice. It can also not be presumed that they had failed to appreciate that the contents of the document cast aspersions on this Court and its judges but yet they willingly chose not to verify the material facts.”

Had they verified the content of the affidavit from the IHC, they would have known the judge named in the document was not in the country at the time, the ruling added.

“They also do not appear to know the limits and exceptions to the freedom of expression e.g. as described in Article 10 of the European Convention for the Protection of Human Rights and Fundamental Freedoms,” the IHC CJ said.

About Rana Shamim, Justice Minallah said, the “stance of Rana Mohammad Shamim that the affidavit could only have been leaked by the Notary from London, prima-facie, raises serious doubts regarding his own credibility. His silence for more than three years…makes his trustworthiness and probity questionable.

“For the above reasons, the Court is satisfied that the acts of the alleged contemnors, prima facie, constitute committing criminal contempt and, therefore, proceeded under the Ordinance of 2003 by framing of charge,” the judgment said, adding that the Attorney General for Pakistan is appointed as a prosecutor in the case.