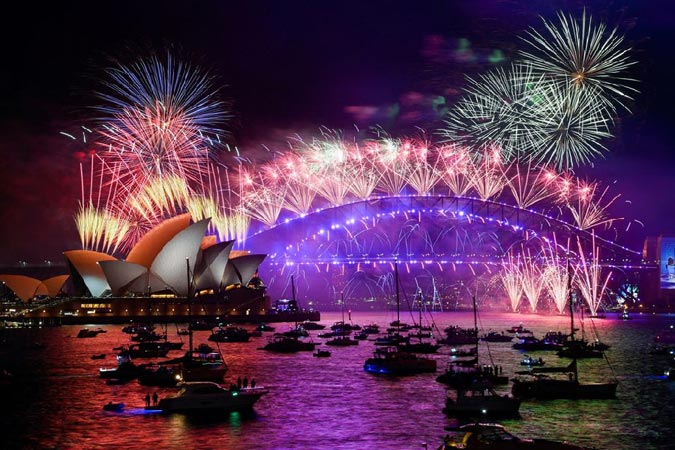 The world has started 26-hour long New Year celebrations in 38 time zones amid Omicron fears which started from New Zealand and will culminate in Baker Island, north of the equator in the central Pacific Ocean.

The fireworks show over Sydney harbor usually symbolizes the start of global New Year festivities for most Brits. However, it may come as a surprise that Australia is not the first country in the world to celebrate the New Year. Parts of Kiribati, including the Line Islands and Kiritimati, kicks off the New Year first, A British tabloid, The Sun reported.

According to the report of English sub-site of Spanish Daily Diario AS, The Pacific Island of Tonga would be the first place to ring in 2022 while heading into a fresh year along with New Zealand and Samoa. The island would lead the world through the New Year’s celebrations follow all over the world. Following Tonga and Pacific Island nations, Australia and some countries of Asia would be the first to celebrate the New Year, many with their own unique traditions.

In Russia, the largest celebration takes place in Moscow’s Red Square. When the Kremlin Clock strikes midnight, Moscow commemorates the New Year with national anthem, followed by a fireworks show. After traveling the world, the New Year eventually comes full circle. A special prayer for the security and stability of the country was arranged at the Faisal Masjid in connection with the New Year after Friday prayer. Dr Muhammad Ilyas, Director General Dawah Academy of International Islamic University Islamabad (IIUI) led the Friday prayer. On the occasion of the New Year, he urged worship and prayers for the betterment and peace in the coming year. He stressed that whether it is the beginning of the Gregorian year or the beginning of the Islamic year, at the beginning of each year, Muslims should arrange prayers and worship to please the God Almighty. “Today is the day we need to promote peace, brotherhood and tolerance,” he said. On this occasion, Dua for the salvation of the departed souls of mothers of National hero and famous cricketer Shoaib Akhtar, Special Assistant to the Prime Minister Malik Amir Dogar and Senator Ayub Afridi was also held.