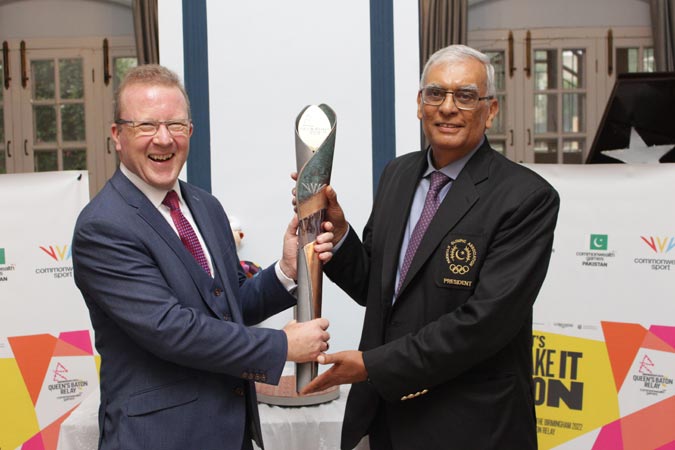 KARACHI: The welcome ceremony of the Queen’s Baton Relay for the Birmingham Commonwealth Games 2022 was held at the British Deputy High Commission here on Monday. The Baton was formally handed over to Pakistan Olympic Association (POA) President Lt Gen (r) Syed Arif Hasan, who also President of the Commonwealth Games Association (CGA) Pakistan, by Martin Dawson, Deputy High Commissioner of UK in Pakistan. The ceremony was also graced by Olympians, sports legends, special and para athletes, diplomats and dignitaries from various sections of life. A number of sports journalists from print and electronic media also joined the welcome ceremony of the Baton. The Queen’s Baton arrived in Pakistan as part of its journey for the Birmingham 2022 Commonwealth Games, which will be held in England from 28th July to 8th August 2022.

Ms Fatima Lakhani, Vice President CGA Pakistan and Chairperson of the Organising Committee of the Queen’s Baton Relay, briefed the attendees about the history of Queen’s Baton Relay. She lauded the organising team for the successful holding of the event. British Deputy High Commissioner Martin Dawson welcomed the guests and thanked Arif Hasan and his team. He appreciated the CGA Pakistan’s efforts to organise various events for sharing the message of peace and friendship through Queen’s Baton in Pakistan. He told the audience that Karachi was his second home in Pakistan. “My best wishes are for the Pakistan athletes who will surely give their best during the Birmingham Commonwealth Games 2022. He again thanked the honourable guests for joining him to celebrate the Baton’s arrival in Pakistan. 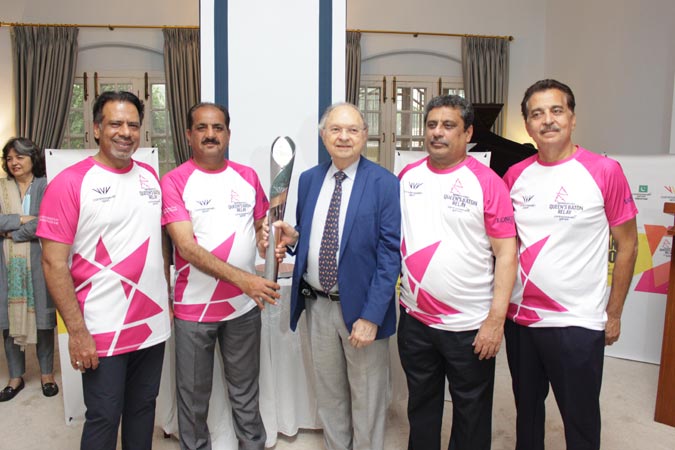 Arif Hasan also the Deputy High Commissioner for arranging a gracious welcome ceremony. “Despite the rainy weather, holding of the welcome ceremony in a befitting manner is a rare sight and commendable.” He expressed the hope that the Birmingham 2022 Commonwealth Games would be successful despite Covid-19 issues. The Baton was handed over to squash legend Jahangir Khan, hockey legends Hassan Sardar, Rasheedul Hassan, karate player Kulsoom Hazara, boxing star Mehrullah, Olympian Arshad Hussain who displayed the Baton to the audience and media. The next event of the Queen’s Baton will be held on Tuesday (today) at Sindh Madressatul Islam University – The School of Father of the Nation Quaid-e-Azam Muhammad Ali Jinnah. Later, Baton will visit Mazar-e-Quaid, where international medallists, athletes, youngsters and officials of the various sports associations will exchange and relay the Baton.