‘Nightmare Alley’ and the pitfalls of the period remake 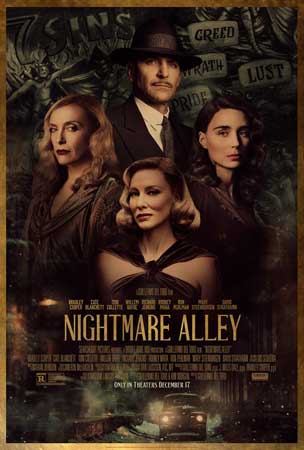 Aremake is an invitation to audacity and Guillermo del Toro, the director of the new “Nightmare Alley,” could never be accused of being timid. His remake of the 1947 film noir goes big in its script and its settings, its décor and its emotions. It’s a spectacle imbued with purpose, but its sense of purpose turns out to be all too conspicuous. The film’s overbearing effort to say something serious about society at large seems to force del Toro’s directorial hand. It pushes him to up the razzle-dazzle in order to keep the didactic element entertaining. The result is a movie that is bloated in length, literal in its messaging and overdecorated, like a cinematic Christmas tree, with dutiful dramatics that leach it of tension, energy and spontaneity. Its failures suggest the kind of opportunities that movie remakes present, and the kind of daring that this one is missing. The source material for both films is a 1946 novel by William Lindsay Gresham and in the remake the core story remains unchanged.