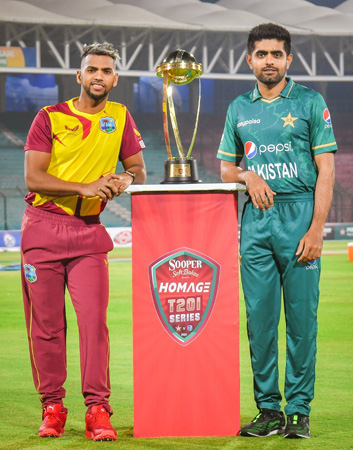 KARACHI: International cricket is resuming in Pakistan when skipper Babar Azam and his men take on Covid-hit West Indies in the first of three Twenty20 internationals at National Stadium Karachi here on Monday (today). West Indies are coming into this T20I series hurting from how their title defence went at the T20 World Cup a month ago. They’ll have more than just hurt to deal with, given the positive Covid-19 tests for Sheldon Cottrell, Roston Chase and Kyle Mayers, which have ruled the trio out of all three T20Is. While West Indies are dealing with that, Pakistan will come back to a format in which they might feel they ought to be world champions in. They had trampled through the group stages in the World Cup and had the semi-final all but sewn up against Australia. The tourists will now have to pick replacements from their large touring squad against an in-form Pakistan playing in familiar conditions. “We want to carry the momentum and the confidence that we have gained during the World Cup and the tour of Bangladesh,” Babar told media on Sunday. Pakistan have just returned by whitewashing Bangladesh in the Twenty20 series 3-0 in Bangladesh before winning the two-match Test series 2-0. “There has always been talk that they are missing some key players but all those who are here are of international standard so we will not take them easy.” Pakistan have beaten the West Indies in 12 of their 18 T20I clashes, suffering three losses and as many no results. Babar has formed an unbreakable opening partnership with Mohammad Rizwan and a solid batting line-up alongside a bowling attack led by the pace of Shaheen Shah Afridi has seen the team win eight of their last nine T20Is. Rizwan is the first batsmen ever to score 1,000 T20I runs in a calendar year, amassing 1,123 in 26 matches, while Babar has scored 853 in the same number of games. The West Indies have had contrasting fortunes, failing to qualify for the World Cup semi-final after winning the competition in 2012 and 2016. “We know what happened in the World Cup and we’re not going to go back there,” head coach Phil Simmons said. “We are looking to move forward and we now want to move forward.” Pakistan are hoping the series will help them convince other teams to visit after New Zealand abandoned a tour due to a security alert in September. The cancellation was followed by England withdrawing their men’s and women’s teams from a series scheduled for October. “It was important to have this series and we must appreciate the West Indies team for coming here because there were fears about whether teams will come or not,” said Babar. “I am sure with 100 percent crowds allowed we will have entertaining cricket.” Monday’s game will be followed by T20Is on Tuesday and Thursday and by three one-day internationals on Saturday, Monday and Wednesday — all in Karachi. The pitch at the National Stadium is expected to be full of runs, with the weather forecast to be pleasant and clear. The match is starting at 6:00pm local time, which reduces any effect dew might have. Pakistan have won all four T20Is they’ve played at this venue, although the first game was back in 2008 and the other three came in 2018 — and were against West Indies.