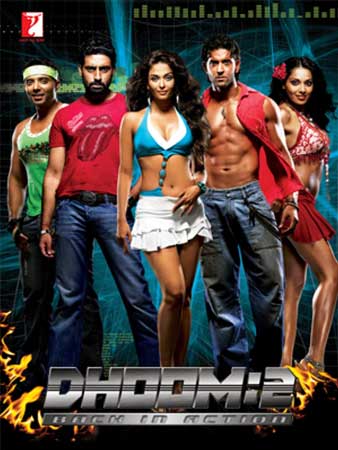 One can imagine Hrithik Roshan as a desirable chef, or even as a snooty kid. But did we ever expect to see him play the queen of England, an old man or for that matter, a sculpture? As Hrithik Roshan played Aryan Singh aka Mr A in Dhoom 2, the ‘Master of Disguise’ emerged as the coolest conman in Hindi films.

Dhoom 2 is marking 15 years of release today. You might feel old but Hrithik continues to give everyone a run for their money. In this action-thriller, he swept off the audience with his uber cool thief as he stole the dough from under the nose of the cop

The Dhoom franchise kicked off in 2004 with Abhishek as main man ACP Jai Dixit and Uday Chopra as his goofy assistant. The plot revolved around these two chasing thieves who undertake big robberies. They chased after John Abraham in the first film and travelled around the globe on the scent of Hrithik Roshan in the second one. While John played the ‘antagonist’ in the truest sense of the word, Hrithik was more of a anti-hero, rather than an all-black villain.

Hrithik had shared in an Instagram post last year that his disguises and all the looks in the movie were inspired by Bruce Willis, Pierce Brosnan and Amitabh Bachchan. Call it the grey shades he sports in the film, his chiselled body, the near-impossible robberies or his arc in the film, we loved this character for being a baddie. And a female thief at par with Hrithik’s suave conman wasn’t an easy casting too. But then, Yash Raj Films did get the best – Aishwarya Rai.

Dhoom 2 gave Aishwarya an image makeover too. Until then, we’d seen her her playing girl-next-door or exuding elegance in complex roles as Sanjay Leela Bhansali’s muse in Hum Dil De Chuke Sanam and Devdas. Dhoom 2 unleashed her sexy side.

Director Sanjay Gadhvi told IANS, “This geometry of Hrithik and Aishwarya was an important sort of a milestone in the film and I think in the world of mainstream entertainment in India. It was a good and solid paring, which has stood the test of time.”

Aishwarya flaunted a bronzed look, and thus her Sunehri – “the golden girl” – along with Hrithik’s Mr A were the duo that gave nightmares to the entire police department. They were not just good at their job, but were two incredibly good-looking people who managed to hide their bad side behind those washboard abs. And their sizzling chemistry continues to remain a benchmark.

Bollywood stylist Anaita Shroff Adajania designed the looks of the two glamorous thieves. She had previously revealed that producer Aditya Chopra wanted Dhoom 2 to be “the hottest and sexiest film ever.” Stating how she gives her characters a “street edge” her aim in Dhoom 2 was to keep them “real in a global manner”.

The two even danced like no one’s watching, be it the salsa of “Dil Lagana” or the contemporary in “Dhoom Again”. Choreographer Shiamak Dawar said he incorporated “very strong Bollywood dance” in Dhoom 2’s title track. “Suddenly, we were to put a little bit of jazz and contemporary. It was quite a thought process to see Hrithik and Aishwarya interpret the song. I was very proud of them because when they both came in together and it was electrifying!”

Though by the time Dhoom 2 released, Aishwarya Rai and Abhishek Bachchan were officially dating, her chemistry with Hrithik was electric.

In the age of Bluffmasters and Bunty Aur Bablis, here were two thieves who had everything going solid for them. They came, they saw and they conquered the screens, setting it on fire.