Six dead in Upper Kohistan when car crashes into ravine 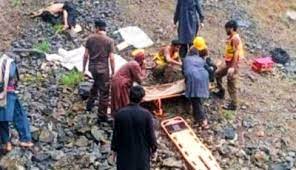 KOHISTAN: A car carrying six people tumbled over into a ditch in Upper Kohistan in a terrible accident on Wednesday.

As per details, the appalling road crash was reported in Upper Kohistan’s Lottar area, where a car carrying six persons including two women and children plunged into a ravine, which resulted in their death, police said.

The rescue operation was underway to retrieve the bodies from the gorge.

When a school van plunged into a gorge in Rawalakot on October 21, at least three students were murdered and 15 others were injured. According to the authorities, the collision occurred in the Khai Gala area.