* The skyscraper would be the first in the Big Apple by a black architect, Ghanian-British Sir David Adjaye of Adjaye Associates 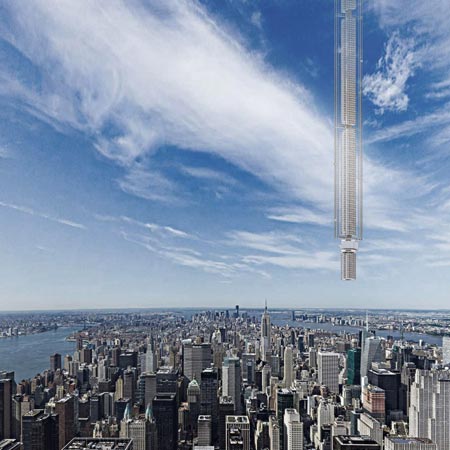 Stunning renderings have been unveiled of an incredible ‘upside down’ supertall New York skyscraper that cantilevers outwards from the bottom up.

If approved, ‘Affirmation Tower’ will not only become one of Manhattan’s most eye-catching skyscrapers, but the second tallest in the city – and in the Western Hemisphere – behind the 1,776ft-tall One World Trade Centre.

The skyscraper would be the first in the Big Apple by a black architect, Ghanian-British Sir David Adjaye of Adjaye Associates.

The firm stated that an intentional decision was made not to trump the height of One World Trade Centre ‘out of respect for what represents’.

However, it would be home to the highest occupiable floor in the Western Hemisphere.

The proposed site is on Manhattan’s west side near Hudson Yards and the plan is for the tower to house the headquarters of the National Association for the Advancement of Colored People.

And if approved, Affirmation Tower would be New York City’s first and largest skyscraper building owned by majority black and women-led companies. The developer team is black-owned and women-owned and the general contractor, JV, is 35 percent woman-owned.

According to a statement, the tower is shaped like a ‘blossoming tree because metaphorically and physically, this project is designed to put down roots for women and minority representation within the NYC skyline – tower’s design features a firm trunk, branching out and creating incredible possibilities’.

It adds: ‘A departure from the traditional monolithic skyscraper, the design vertically extends as if growing like a tree directly situated within the landscape of New York’s urban grain.’

The physical constraints of the site also inspired the shape, with the development team working with Thornton Tomasetti, ‘a worldwide leader in the design of tall and supertall buildings’, to validate the project’s structural feasibility and constructability.

The creators stress that Affirmation Tower ‘will not be a sealed-off megatower, but rather an open and inviting destination for New Yorkers from all boroughs and backgrounds… a new icon for 21st-century Manhattan with world-class public spaces’.

They add: ‘The Tower’s proposed world-class amenities, community and public spaces including rooftop entertainment centre will provide a well-timed boost to New York City’s tourism economy, further cementing the city’s rebound and status as a cultural and hospitality centre.’