* There are also two fine cathedrals, a Moorish castle, art museums — and no tourist hordes 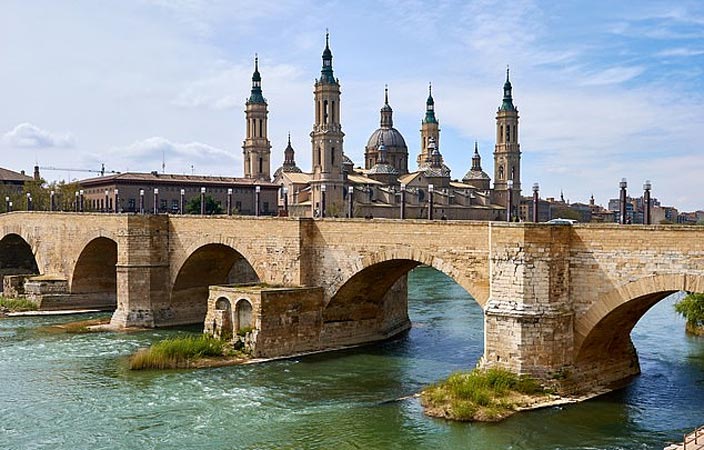 Zaragoza is said to be home to more bars per capita than any other Spanish city. Yet, as raucous as this may sound, the capital of the region of Aragon – roughly halfway between Barcelona and Madrid – is nothing of the sort.

Most are elegant drinking holes tucked away on labyrinthine lanes, offering tasty tapas.

There are also two fine cathedrals, a Moorish castle, art museums – and no tourist hordes.

Its entrance may be nondescript – hidden beneath a colonnaded walkway by a tram stop – but this homely hotel is brilliantly located by Mercado Central and the main city square, Plaza del Pilar. Staff are friendly, and rooms are spotless and good value. Breakfasts are £4.60 extra.

Next to Puente de Santiago (Santiago Bridge), this slick, modern hotel has rooms with splendid views of the River Ebro and the Basilica del Pilar. It’s a minimalist affair, and there’s a cosy lobby bar. It’s worth paying £10 extra for a better view.

This boutique hotel is on a quiet lane 100 metres from Plaza del Pilar and a moment’s stroll from the Church of Santa Isabel. Rooms have a fresh look with splashes of modern art. The design is by renowned Spanish firm Alfaro-Manrique.

Overlooking Basilica del Pilar, this is great if you want to be bang in the centre. You can pay an extra £10 or so for a room facing the basilica, or opt for one of the fancy ‘superior interior hot tub’ rooms for £30 more.

The Palace of Aljaferia, with its turrets, towers and high stone wall, dates from the 11th century. It predates Granada’s Alhambra and Seville’s Alcazar. Its enchanting courtyard has orange trees and intricate plaster reliefs in Arab designs. You must book ahead to visit. Entrance costs £4.20

According to legend, the Virgin Mary is said to have appeared as an apparition on a pillar before the apostle St James the Greater at the site of what is now the Basilica del Pilar. The extraordinary cathedral, built around the 17th and 18th centuries, is free to visit

The other famous Christian place of worship is the ‘Catedral de San Salvador’, which is home to a collection of French and Flemish tapestries.

A £5.90 ticket also gives you a ride up one of the neighbouring basilica’s towers (catedraldezaragoza.es).

Many of the best restaurants are in the Old Town’s popular El Tubo area.

Bodegas Almau (bodegasalmau.es), dating from 1870, has a charming interior lined with wine bottles and a courtyard with barrel tables.

Delicious tapas featuring chorizo, cheeses, olives, Iberico hams and salty/sweet anchovies are served at speed. It costs about £30 for eight dishes with a bottle of wine.

A perfectly cooked portion with potatoes and roasted peppers costs £15. Other dishes include steaming chorizo, tomato salads and chicken fritters with oyster sauce. A meal for two with wine costs about £40.