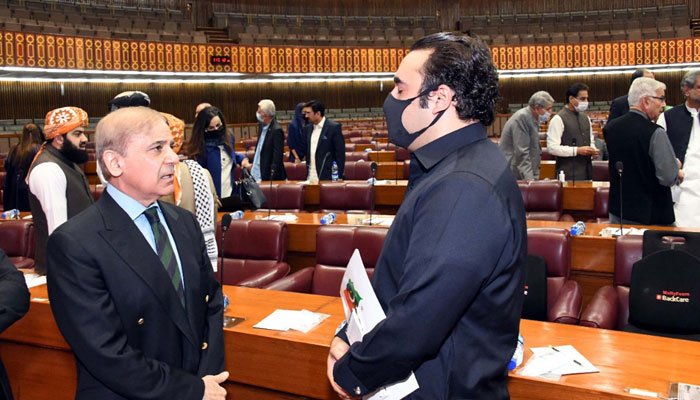 ISLAMABAD: All opposition parties have decided to take on the government during the joint session of the Parliament. They have decided to thwart the PTI’s bid to get controversial bills approved.

The resolution came during a dinner hosted by the Leader of the Opposition in the National Assembly, Shahbaz Sharif for Opposition parties’ parliamentarians.

The Opposition has completed negotiations on the joint sitting of the Parliament. It decided that all Opposition parties should ensure the presence of their members during the session.

They agreed to stop possible government legislation on electoral reforms, NAB ordinance and other legislation.

Addressing the dinner meeting, Shahbaz Sharif said the government was not as embarrassed in the House as it was today. He said the Opposition would play a more active and decisive role in the coming days.

The PML-N president said the Opposition would protest against the government at every forum. It will also block the NAB ordinance in any case and go to the courts.

“Imran Khan Niazi wants an NRO for himself and his close cronies,” he said.

Shahbaz said he wanted to convey a message on behalf of himself and PML-N supremo Nawaz Sharif to all Opposition legislators that they should ensure participation in the meetings of both the houses of Parliament.

PPP Chairman Bilawal Bhutto Zardari, speaking at the dinner meeting, said all Opposition parties were united under Shahbaz Sharif’s leadership in the Parliament.

He said the PPP would play a major role with the combined Opposition in the joint session of the Parliament. “Today the main issues of the people are price-hikes, unemployment and abject poverty in the country,” he said.

He said the PPP would remain active at every forum where there would be opposition to the government. Bilawal told the media the Opposition would also get more successes in the Parliament due to unity in its ranks.

Responding to a question on whether the prime minister was on his way out, the PPP chairman said they were working to ensure it happens.