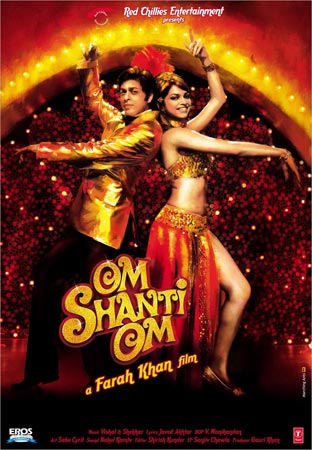 For Farah Khan, it was Deepika Padukone’s Hema Malini-like ‘old world charm and poise’ that got her cast in her debut film, Om Shanti Om.

The 2007 blockbuster clocks 14 years today. On the occasion, we revisit the reincarnation drama starring Shah Rukh Khan, and the various stories attached to its making.

Farah had spoken to Film Companion in 2017 about getting pregnant during the final schedule of ‘Om Shanti Om.’ Interestingly, she said she had a memorable time shooting the song “Dard-E-Disco,” which saw Shah Rukh sporting six-pack abs for the first time. “I got pregnant towards the end of the shoot of Om Shanti Om and we still had to shoot Dard-E-Disco. So every time SRK took his shirt off I would throw up in a bucket that was kept on set! I had to assure him this was not a reaction to his body, which was looking fab!” she said.

‘Om Shanti Om’ is choreographer-turned-director Farah Khan’s love-letter to Bollywood. It’s the project she claims she wrote the quickest because the story came from her adulation of Hindi films. Even antagonist Arjun Rampal’s look had SRK’s inputs. According to Farah, “The moustache that Arjun sports in the film was Shah Rukh’s idea. I loved it because I thought he looked like Vinod Khanna!”

Om Shanti Om was hailed as a one-of-a-kind project for featuring cameos by as many as 31 Bollywood stars in the song “Deewangi.” The song featured stars such as Salman Khan, Sanjay Dutt, Kajol, Rani Mukerji, Priyanka Chopra, Preity Zinta, Saif Ali Khan and several others.

“Deewangi” also brought yesteryear stars such as Rekha, Dharmendra, Shabana Azmi, Jeetendra and Mithun Chakraborty together. Probably the only A-list actor missing was Aamir Khan. Farah revealed in the same interview why he couldn’t join the shoot.

“I really wanted to get Salman, Aamir and Shah Rukh together in the ‘Deewangi’ song. But Aamir was editing Taare Zameen Par at that time and said his film would get delayed by three months if he came for the one-hour shoot! Later he told me he just didn’t want to come,” Farah said with a laugh.

Om Shanti Om released alongside Sanjay Leela Bhansali’s Saawariya in one of the biggest Diwali clashes of all time. Saawariya introduced two star kids – Ranbir Kapoor and Sonam Kapoor. Farah said that if the clash hadn’t happened, “we would’ve been the first film in the history of Bollywood to rake in Rs 100 crores!”