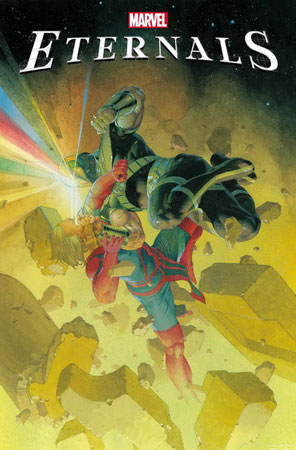 Eternals, the latest movie from the Marvel universe, has received mixed reviews, with critics calling it over-ambitious yet progressive. The film’s ensemble cast includes Gemma Chan, Richard Madden, Kit Harington, Angelina Jolie and Salma Hayek. It is the first major studio film by Chloé Zhao, who won the best director Oscar earlier this year for Nomadland. The Guardian gave Eternals two stars, calling it “magic hour meets PowerPoint”. The paper’s critic Steve Rose said Zhao “manages to get some nice-looking shots and personal drama in her superhero debut, but there’s just too much mythology to explain”. The problem, he added, is that “there’s just too much going on: it’s all headed towards yet another ‘race against time to stop the really bad thing happening’ climax”. He continued: “It’s not exactly boring – there’s always something new to behold – but nor it is particularly exciting, and it lacks the breezy wit of Marvel’s best movies.”