TLP activists on way to Islamabad 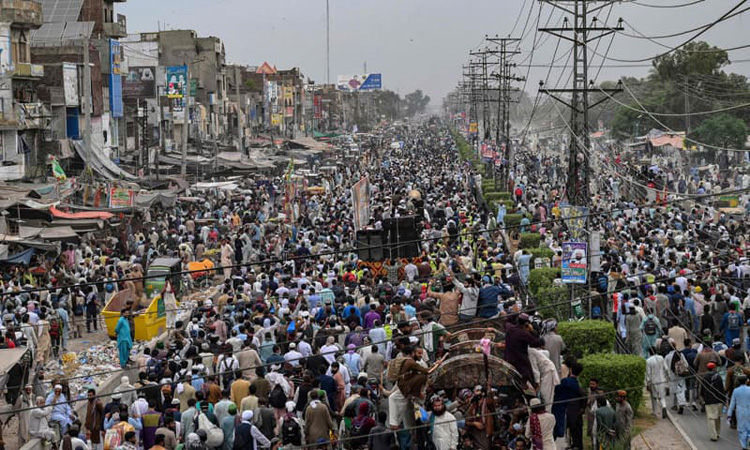 The proscribed Tehreek-i-Labbaik Pakistan (TLP) activists launched a long march on Islamabad from Lahore on Saturday. Protesters were at Muridke on Saturday night to make an overnight stop after travelling through Kala Shah Kaku earlier in the day.

The government has dug up a trench on GT Road near Gujranwala to block the long march. A deep and long pit was dug with the help of cranes while the roads were also blocked in advance by placing containers.

Earlier in the day, the government held talks with four members of the banned outfit, Minister for Law Punjab Raja Basharat said. The law minister’s statement came during a meeting of the committee formed for negotiations which was chaired by Minister for Interior Sheikh Rasheed. The law minister informed the committee that in the last three days, the government has spoken to the banned outfit for four times.

The members of the negotiation team and senior officials including Punjab’s Chief Secretary, Inspector General, Additional Secretary Home, and Lahore’s Commissioner attended the meeting at the office of the Punjab Safe Cities Authorities. They sought input from various institutions and it was agreed that in the first stage a two-member committee comprising a federal minister and a provincial minister would go to Kot Lakhpat Jail to hold negotiations with the banned TLP chief Saad Rizvi, who was arrested in April this year, a private TV channel reported.

Earlier in the day, PM Imran Khan called Qadri and asked him to fly to Lahore. Sh Rasheed, too, was called back to Pakistan from Dubai. He was on vacation for the Pakistan-India T20 World Cup match.

TLP has, on the other hand, also announced that their negotiation team will be headed by Mufti Wazir Ali. A TLP spokesperson said that talks can only take place if the Punjab government becomes serious about it.