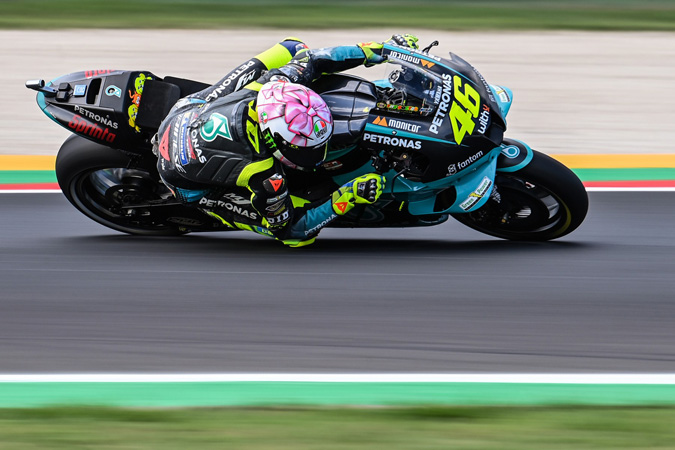 MISANO ADRIATICO: Jack Miller dominated the first day of practice for the Emilia-Romagna Motorcycle GP on Friday, while Fabio Quartararo, who could clinch the title this weekend, was outside the top ten.On a track still wet following rain in the morning and at the start of the afternoon session, Australian Miller set a time of 1 min 41.305 on his factory Ducati.He was a huge 0.927sec faster than Frenchman Johann Zarco of Ducati’s satellite Pramac team.Spaniard AleixEspargaro on a Aprilia was another 0.059 back.Quartararo was 16th fastest at 1:43.09 and will need to gain six places on Saturday morning to advance directly to the qualifying session for the top 12 places on the grid.The French rider’s closest rival in the championship, Italian Francesco Bagnaia, crashed his Ducati in the morning but was eighth in the afternoon.Also missing from the top ten were Spaniards Joan Mir (Suzuki) in 11th and Marc Marquez (Honda) who was 14th.Local hero Valentino Rossi (Yamaha-SRT), was 22nd out of 24 riders, 2.484 slower than Miller.With two races to go, and 25 points for victory, Quartararo leads Bagnaia by 52 points and could clinch the title this weekend.