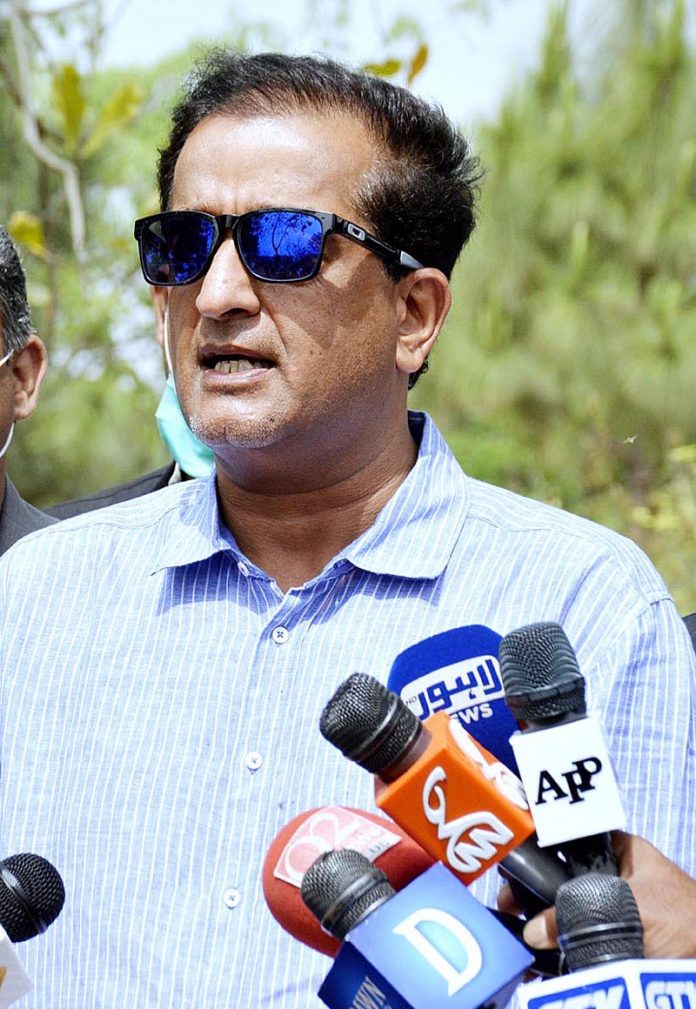 ISLAMABAD: Special Assistant to the Prime Minister (SAPM) on Climate Change Malik Amin Aslam Tuesday said the monitoring of forest resources through remotely sensed data backed by field-based observations, is vital for effective assessment of greenhouse gas emissions and their removals from the atmosphere to slow down global warming.

The amount of information gathered during forest inventories has thus grown rapidly and has, in turn, help improve the ability of forest scientists, researchers, and policymakers to survey and manage many services, such as biodiversity, ecosystem restoration, and carbon sequestration from the atmosphere to slow down climate change and reduce climate shocks in the shape of floods, heatwaves, cyclones, crop failures, wildfires and loss of biodiversity, the PM’s aide Malik Amin elaborated.

Malik Amin highlighted that technology development, adaptation to country circumstances, and its adoption by existing national forest systems offer a promising potential to improve the accuracy of field measurements in forests, reduce the time and the costs accruing from field sampling activities. New technologies could be, however, also a workable way for supporting the implementation of transparent national forest monitoring systems for sustainable forest conservation and management, he added.

The PM’s aide said that today the adoption, adaptation, and viability of technologies by national and subnational entities, private companies, research and academic organizations, NGOs, and civil society could also face many constraints that limit the use of such technologies. PM’s aide said that scientific forest monitoring was considered globally of paramount importance for measuring the progress of any country’s achievements for international reporting and better planning for forest conservation and their sustainable use.

However, the climate change ministry under its World Bank-funded REDD+ Pakistan project has already provided the latest forest monitoring and GIS equipments to all the provinces and territories, previously. And the drones being provided would further support provinces/territories to undertake real-time monitoring of forestry resources including the ongoing forestry initiatives in the country such as the Ten Billion Tree Tsunami Programme (TBTTP) launched under PM Imran Khan’s vision for Clean and Green Pakistan, Malik Amin Aslam hoped.

He also urged the provincial forest departments to establish permanent monitoring systems in their respective territories to make the best use of these modern equipment provided under the World Bank-sponsored REDD+Pakistan project. REDD+ (or REDD-plus) is a climate change mitigation solution in developing countries that functions under the United Nations Framework Convention on Climate Change (UNFCCC). It primarily aims for “reducing emissions from deforestation and forest degradation in developing countries and promoting conservation, sustainable management of forests and enhancement of forest carbon stocks in the countries.

Deforestation and forest degradation are the second leading cause of global warming, responsible for about 15 percent of global greenhouse gas emissions. According to the UN’s IPCC 5th Assessment Report, deforestation and forest degradation accounts for about 11 percent of the total global Greenhouse Gas (GHG) emissions. Yet, at the same time, the forestry sector has the potential to sequester 31 percent of climate-altering carbon emissions from the atmosphere. Around 80 percent of the Earth’s above-ground terrestrial carbon and forty percent of below-ground terrestrial carbon is in forests.

In addition to the large contribution of deforestation and forest degradation to global emissions, combating both have been identified as one of the most cost-effective ways to lower emissions, according to UN studies. Amin cautioned that the issue of deforestation and forest degradation needed to be effectively tackled, as it would otherwise limit the options available to cut greenhouse gas emissions, greenhouse gas concentrations, and increases in global temperatures to levels where humans and earth ecosystems would survive.

“Any cut in the rate of deforestation and forest degradation has the benefit of averting a significant source of heat-trapping carbon emissions and addressing other environmental and social problems as a result of deforestation,” he remarked. The PM’s aide emphasized that the Ten Billion Tree Tsunami Programme (TBTTP) is a stunning and the country’s largest-ever afforestation program, which has already started providing several benefits in the shape of biodiversity and ecosystem restorations, improvement in local weather conditions, soil stabilization, and improved rains in the areas forested under the TBTTP.