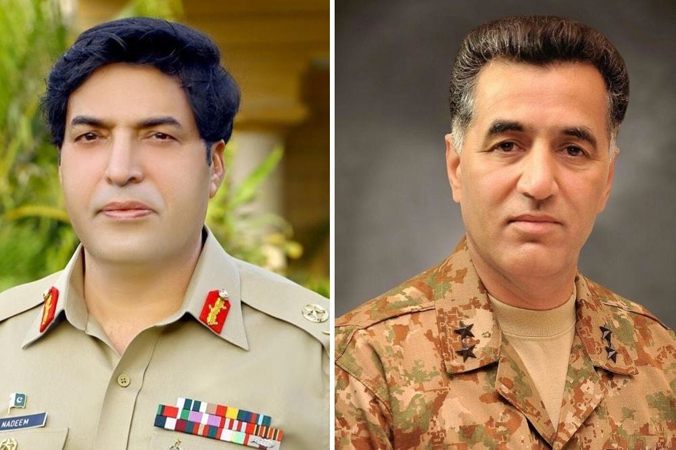 Lieutenant General Nadeem Ahmed Anjum has been appointed as the director-general of the Inter-Services Intelligence (ISI), the post previously held by Lt Gen Faiz Hameed.

Lt Gen Faiz Hameed, formerly the ISI director general, has been posted as the Peshawar corps commander. In a statement, the Inter-Services Public Relations (ISPR) announced other postings as well, saying Lt Gen Mohammad Saeed has been posted as the Karachi corps commander, Lt Gen Nauman Mehmood has been appointed the president of the National Defence University, and Maj Gen Asim Malik has been promoted to the rank of lieutenant general as well as appointed the army’s adjutant general.

Earlier, the ISPR announced that Lt Gen Mohammad Amir has been posted as Gujranwala corps commander, while Lt Gen Asim Munir has been appointed as the quarter master general.

Lt Gen Anjum was previously the commander of Karachi Corps. He was promoted to the rank of lieutenant general in September 2019.

Hailing from the Pakistan Military Academy’s 78th Long Course and the Punjab Regiment, Lt Gen Anjum has also served as the commandant of the Command and Staff College, Quetta. The new DG ISI has also previously remained the inspector general of the Balochistan Frontier Corps (North) and commanded a brigade in Kurram Agency, Hangu.

The outgoing DG ISI, Lt Gen Hameed, was given the role on June 16, 2019. He had previously served in the ISI as the head of internal security. Lt Gen Faiz is from the Army’s Baloch Regiment. His appointment had come at a very crucial time when both external and internal security challenges seemed to be growing.

Lt Gen Mohammad Amir is currently serving as the adjutant general. He has also served as the General Officer Commanding Lahore.

Lt Gen Asim Munir was serving as the Corps Commander Gujranwala. He served as the ISI director general prior to Gen Hameed.