Cinemas in Hyderabad and downfall of the industry

* My father once told me that on the day when his friend Noor was born, Noor's father was waiting in queue to buy a ticket to watch Dilip Kumar's 'Aan' at the New Majestic Cinema 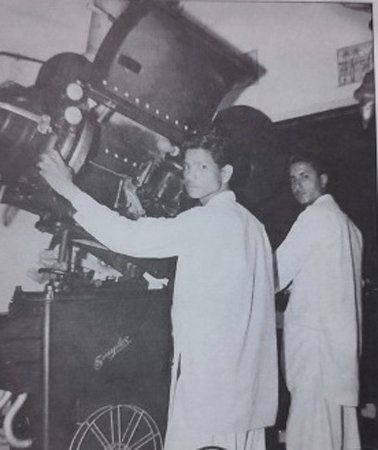 Every detail written in this article was narrated to me by my father Basharat Ali Soomro. It’s the pre Zia era; Camel carts are carrying huge posters of movies to be embellished at 20 different cinemas of Hyderabad. Along with a cart can be seen a 6ft person known as Badamani, pretending and attired as Genie from the film Saqi, treading and scaring everyone, walking from Shaab Cinema to all over Hyderabad. Paan Shops, Hair salons, Tea Shops and other shops with sources of entertainment contain posters of their favorite films, actors and actresses. A picture of Madhubala and Nargis is entrenched everywhere. Some passionate fans, even, carry the picture in their pockets. Tonga’s are standing at the portico of cinemas. Tickets are stamped just like that we see in courts. Cinema is an only source of entertainment for every kind, whether labour or officer. Films are considered as ‘beacon of hope in a sea of darkness.’

My father once told me that on the day when his friend Noor was about to be born, Noor’s father was waiting in a queue to buy a ticket to watch Dilip Kumar’s Aan at New Majestic Cinema. All the carpenters were aware that Noor’s father might be at the cinema. So they all walked to the cinema. Upon reaching they proceeded to give him good news and to congratulate him on the birth of his son. They asked him to come and leave the queue. But his father was crazily adamant and said I will not come before finishing the film. This was the love for cinema for everyone in those days. People were crazy at that time for their favourite actors. News of infants didn’t excite them as much as new movies in theatres.

Many of their names were changed as their owner changed through ages. Rahat was the final name of Emporium and Pak Cinema. Taj Mehal Talkies was later known as Shalimar. Naz Cinema changed its name to Noor Mehal. Paradise became Qaiser. Nishat cinema was called Prabhat. Shams had many names; Krishna Talkies, Jagat Talkies, Nigar and at last Shams. The biggest cinema of all of them was Nishat Cinema and the most beautiful one was Capitol Cinema, owned by two Hindu brothers. The wondrous Capitol Cinema washroom’s dividend walls were made of Sang e Mar Mar. It was so huge, picturesque with beautiful architectural design that if preserved by the department of antiques it might have been a museum of today instead of becoming remnants of the past.

Show timing during the month of Ramadan was the same, but additional breaks were given to break the fast. Those who were having the fast left their seats to break it and then came back to resume the show. The projection screen shows the timing of Maghrib in silver letters.

The titles of Hollywood movies were also changed so that illiterate people can get the idea of what the movies were about and also to comprehend the theme of the movie. For example: The Professionals became Kiraye Kay Gorilay, Mackenna’s Gold became Sonay Ki Talash, Where Eagles Dare became Uqabon Ka Nasheman and The Great Escape was known as Janam Kay Qaaidi. In those days’ script, theme, cast and storyline of complete movies were also on sale inside of theaters, probably costing 1 anna, in the form of small printed copies.

During Zia’s regime and much extremism, a ban was implemented on the movies and thus the downfall of our industry and the cinema’s around Pakistan erupted. Zia’s rigorously detrimental policy on film production and censorship during early 1980’s were hostile for the film society, and that gap isn’t filled yet, because of several restrictions contributed during his regime. Many filmmakers and cinemas suffered during this hiatus. After that it became fashionable to destroy cinemas to replace it with huge plazas and flats. I was the eye-witness over the destruction of New Majestic Cinema, which was sold to Arif Builders.

Hyderabad suffered; 10 years back there were four cinemas out of 20 in Hyderabad – New Majestic, Qaiser, Bambino and Shaab – but today there are only two cinemas, Bambino and Shaab, that too in desolated condition. No one ever goes there. They will be haunted or destroyed soon.

Although our industry was strong and strident when the movies were made in the pre Zia age; such as Street 77, Daal Mai Kala, Raat Ke Rahi, Shatranj, Khamosh Raho and Insaaf Aur Qanoon conveying the message of social reforms, and adaptation of novels. One of such films was Zinda Laash adapted from Bram Stoker’s ‘Dracula.’ Impact of these movies was no less than that of Shree 420, Anari and Awaara. The climax of Insaaf Aur Qanoon harshly castigated the law in which a character, after being acquitted for crime that he didn’t commit, was asking to give him his lost year back that he spent in prison. His life was lost and he was begging to court to convict him again. Indian movie Shahid has the same philosophy and ideas like Insaaf Aur Qanoon.

Now it’s been two years since an awkwardly named film industry, Lollywood, had bestowed its audience with a film. Not a single film was released in almost two years of pandemic. Why is that so? Why are artists not working on new projects? Are they afraid of bankruptcy? This is the unfilled gap I was talking about earlier.

Contrary Indian cinema is emerging and tightening its grip, entrenching in the minds of people by releasing new web-series and films every week on OTT platforms, whereas artists of our industry decapitated their art for the sake of money. Our so-called artists were rejoicing over the fame of the worst movies, Do Takkay kay serial and appreciating each other without any reason, whereas our neighbors were working on mythical projects such as Asur and Tumbbad.

In the competition of series like Dark, Money Heist, Asur and even Ertugrul, our industry is contributing 2 takkay kay dramas, and idhar nahi jaongi, udhar nahi jaunga labeled movies. Our industry is partial to romance, divorce, polygamy and the techniques taught to destroy families, which had already influenced the divorced culture in celebrities. It’s impractical to witness movies like Tumbadd and series like Asur from our industry. Meanwhile the TV drama Parizaad is at its peak. Everyone loves to watch the character and his desolated condition but in reality, no one supports a guy like him.

Additionally, our historical stories of sub-continent and taboo culture are also adapted by the likes of Sanjay Leela Bhansali and Ashutosh Gowariker. Though a bogus movie, Gowariker attempted to direct Mohenjo Daaro and accentuated the 5,000 years old civilization located in Sindh, province of Pakistan. Why any film-maker in our industry didn’t venture at first? And recently Sanjay Leela Bhansali has announced to make a film on Heera Mandi, located in Lahore, again the city of Pakistan. In the last decade Pakistani industry has given us comedy in the name of art.

Art of an artist must rejuvenate its position in our industry. Last of our films which failed to entertain, and I mean to entertain because the movie was not meant to entertain, was Durj directed by Shamoon Abassi.

To conclude I would say that artists should work on new projects repudiating the genre of comedy to history, drama, mystery, psychological thriller and crime. Many novelists and story-tellers are waiting for adaptation of their works. Hope to find maturity in our industry to compete at least with our neighbours.

The writer is a student at the University of Sindh and can be reached at saqlainali878@gmail.com