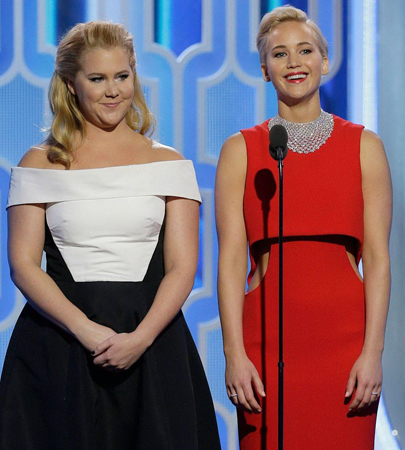 Jennifer Lawrence and Amy Schumer showed their support for abortion rights at the Rally for Abortion Justice in Washington, DC. The comedian, 40, shared a photo to Instagram of her and Lawrence, 31, participating in the Women’s March protest at Freedom Plaza in the nation’s capital. “I don’t have a uterus and she is pregnant but we out here @womensmarch @plannedparenthood #rallyforabortionjustice,” Schumer wrote in the caption. Dressed in a jumpsuit and a blue cap, the I Feel Pretty actress and mom to son Gene, 2, held an “Abortion Is Essential” sign, while Lawrence – whose baby bump was on display in a checkered dress – held a sign that read, “Women can’t be free if they don’t control their bodies.” Schumer had her uterus and appendix removed in September after dealing with years of pain from what her doctors determined was extensive endometriosis, a condition where the tissue that usually lines the uterus grows outside of it.