Media freer than ever, says PM 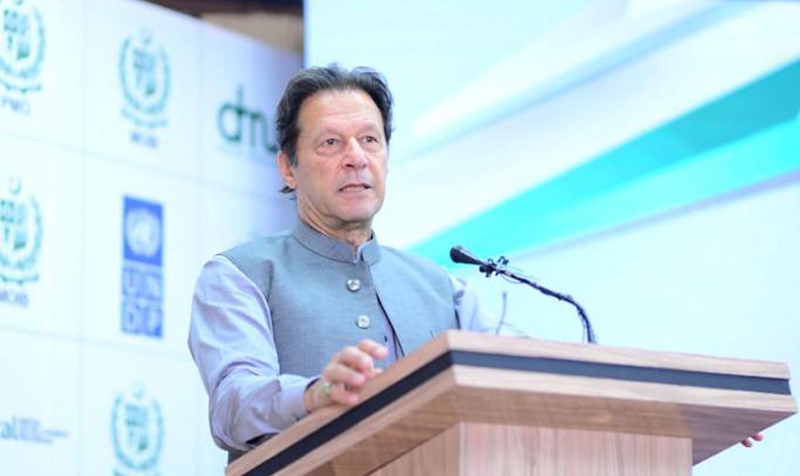 Prime Minister Imran Khan on Friday said his government is not against a free media but only has a problem with “fake news and propaganda”, adding that the incumbent government had given “more freedom than ever” to news organisations.

“[Fake news] is degrading for the country,” the prime minister said, as he addressed the launch ceremony of the Digital Media Development Programme. The premier urged the youth to promote the vision of Pakistan.

He noted that when a person tells the truth, their stature in society rises, and no one respects a person who lies. “The same goes for journalism. They can take advantage by running fake news, but with time, it will be discredited.”

The thing that matters is credibility, he said, adding that the PTI-led government wants the media to tell the truth.

“You can take a look at the records, and I guarantee you that 70% of the programmes are against us,” he said. “I can guarantee you that the sort of slander that was committed against the prime minister and ministers was not done in any other democracy,” he added.

PM Imran Khan said when the prime minister of Azad Jammu and Kashmir was recently elected, three major newspapers ran headlines stating that he was chosen for the position through pseudoscientific methods such as numerology.

“What could be bigger slander than this? That the sitting prime minister had picked AJK’s prime minister through numerology. If they had published something like this in England, I can guarantee you that I would have gotten millions of dollars in damage and Shaukat Khanum would have gained a lot from it.” The prime minister said his government was not using state media to his advantage, like the previous rulers, who “would use it to divert attention from their corruption”.

‘Pakistan a willing companion of the US’: Meanwhile, PM Khan has said that the Afghan Taliban can be potential partners in peace for both the United States and Pakistan, terming American President Joe Biden’s hard line against the group “unnecessary”. In a conversation with Newsweek magazine, Khan pointed out that the “plethora of terrorist groups” could take advantage of the conflict in Afghanistan.

The conversation with senior journalist Tom O’Connor conducted via email focused on a number of subjects including Afghanistan, the relations with United States, China Pakistan Economic Corridor (CPEC), counter-terrorism efforts and pandemic.

PM Khan said Pakistan is a “willing companion” of the US in counterterrorism and other endeavours. The premier noted that cooperation between regional powers and the United States is crucial in avoiding a catastrophe, as the dynamics had evolved quickly after the Taliban’s takeover of Afghanistan in mid-August. Talking about the Taliban assuming complete power for the first time in 40 years, he said this might lead to a stable security situation in the country. The premier hoped the Taliban government would open up possibilities for trade and development projects.

PM Imran Khan, however, noted that despite hope, past governments had left the war-torn country in shambles. The premier also stressed the need to neutralise terrorist groups in Afghanistan, especially the TTP. The prime minister noted that Pakistan and the US would need to work to counter terrorism in Afghanistan. He also stressed addressing the humanitarian crisis and economic issues of the country.

“I believe that the US can work with a new government in Afghanistan to promote common interests and regional stability,” the prime minister said.

The Afghans will accept China’s economic support if Beijing offers, he said, adding that the group had also welcomed the prospects the China-Pakistan Economic Corridor (CPEC) offers and establishment of close relations with Beijing.

Recognition of Taliban govt: On recognising the Taliban government, he said Pakistan aims to reach a decision in this regard after consultations with neighbouring countries. The premier noted that the group had formed an interim government, but once they establish control across the country, “it would legally qualify for recognition”.

The prime minister said Islamabad was extremely concerned about the threat of terrorism from Afghanistan – particularly from the TTP. The terrorist group was has been responsible for scores of attacks and killing several innocent people.

Imran Khan mentioned that TTP had also been responsible for most of its attacks on Chinese citizens working in Pakistan.

“Pakistan desires to promote a comprehensive, not selective, approach to neutralising terrorists’ threats from Afghanistan. We will cooperate with the international community, including the US, in this effort,” he said. Khan said Pakistan would work with the authorities in Afghanistan to halt the TTP and other sources of terrorism emanating from the neighboring country.