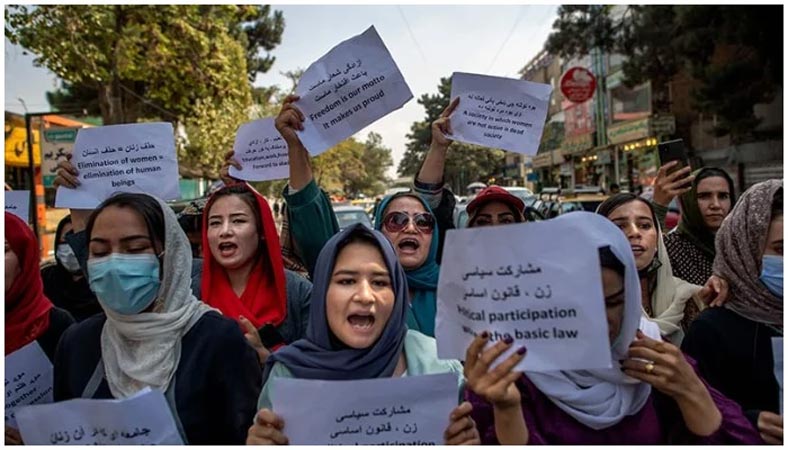 About two dozen women activists protested outside Afghanistan’s women’s ministry on Sunday after it was closed by Taliban militants in power in Kabul and replaced by their Ministry for Promotion of Virtue and Prevention of Vice.

Female staff said they had been trying to return to work at the ministry for several weeks since the Taliban takeover last month, only to be told to go home.

The sign outside the Ministry of Women’s Affairs has been replaced by one for the Ministry for Promotion of Virtue and Prevention of Vice.

“The Ministry of Women’s Affairs must be reactivated,” said Baseera Tawana, one of the protesters outside the building. “The removal of women means the removal of human beings.”

When Taliban Islamists were in power from 1996-2001, girls were not allowed to attend school and women were banned from work and education.

During that period, the Ministry for Promotion of Virtue and Prevention of Vice became known as the group’s moral police, enforcing its interpretation of sharia that includes a strict dress code and public executions and floggings.

The protest came a day after some girls returned to primary schools with gender-segregated classes, but older girls faced an anxious wait with no clarity over if and when they would be able to resume their studies.

“You cannot suppress the voice of Afghan women by keeping girls at home and restricting them, as well as by not allowing them to go to school,” said protester Taranum Sayeedi.

Taliban officials have said they will not return to their fundamentalist policies, including the ban on girls receiving an education.

Meanwhile, a pickup truck carrying Taliban fighters was the target of a bomb in the Afghan city of Jalalabad Sunday, local media reported, a day after at least two people were killed in a series of blasts in the area.

Witnesses told local media that several wounded Taliban fighters were taken to hospital after the explosion, which one journalist said happened near an interchange for transport to and from the capital, Kabul. Further details were not immediately available.

At least two people were killed in Jalalabad on Saturday in the first deadly blasts since the last US forces withdrew from Afghanistan on August 30.

The eastern city is the capital of Nangarhar province, the heartland of the Islamic State group’s Afghanistan branch.

Although both IS and the Taliban are hardline militants, they have differed on the minutiae of religion and strategy. That tussle has led to bloody fighting between the two.