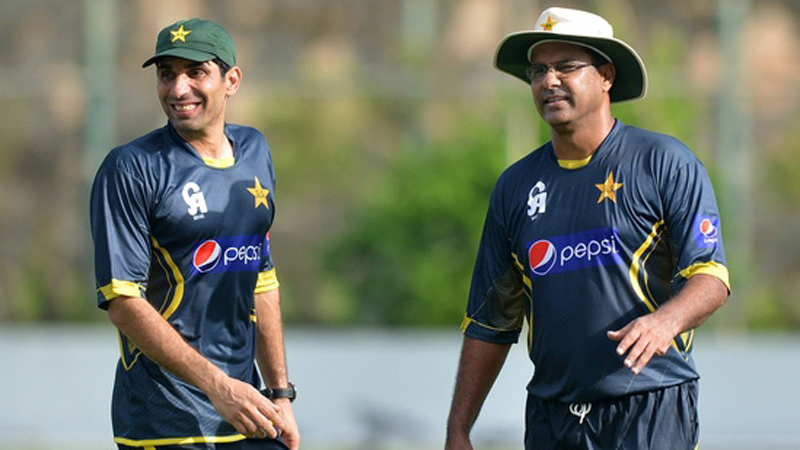 LAHORE: Head coach Misbahul Haq and bowling coach Waqar Younis resigned Monday citing family concerns and bio-bubble restrictions in a move that might hurt the team preparations for New Zealand series and Twenty20 World Cup. Misbah cited spending “considerable time away from my family in a bio-secure environment” because of Covid-19-related restrictions as the reason for his decision, while Waqar said that since he and Misbah had started out in their roles together, it made sense to also step away together. 47-year-old Misbah, who took over as head coach in September 2019, said he had made the decision while undergoing mandatory quarantine after testing positive for Covid-19 following Pakistan’s tour of the West Indies last week. “The quarantine time provided me with an opportunity to reflect on the past 24 months, future commitments and bio-bubble environment and on considering that I made the decision,”Misbah said in a statement released by the Pakistan Cricket Board (PCB). Misbah admitted the timing of his decision — which came as Pakistan named a 15-man squad for the Twenty20 World Cup to be held in the United Arab Emirates next month — may not be ideal. “But I don’t think I am in the right frame of mind for the upcoming challenges and it makes sense for someone fresh to step in and take the side forward,” he said.

Waqar said Misbah’s decision had prompted him to step down. “After Misbah shared with me his decision and future plans, it was a straightforward one for me to resign as we had walked into the roles together, had worked collectively as a pair and now also step down together,” Waqar, a legendary former fast bowler, was quoted as saying in the PCB release. Misbah, appointed chief selector in 2019 before leaving the post after a year, coached Pakistan in 16 Tests, with the team winning seven, losing six and drawing three.Under him Pakistan managed to win six of their 11 ODIs, with four losses and one no result, as well as secure 16 wins in 34 Twenty20 internationals, losing 13 and five no results.

PCB said former off-spinner Saqlain Mushtaq and allrounder Abdul Razzaq will act as interim coaches for the series against New Zealand starting later this month. “The team management for the T20 World Cup will be appointed in due course,” the release said. Misbah and Waqar communicated their decisions to the PCB on Monday morning, around the time the squads for the upcoming series against New Zealand and England at home, as well as the T20 World Cup, were made public. They still had a year left in their contracts. The influence of Ramiz Raja, the PCB chairman-in-waiting, is quite apparent in the development. Ramiz has been nominated by Imran Khan, Pakistan’s Prime Minister as well as the PCB’s patron-in-chief, to the Board of Governors, and although he is not the chairman officially until September 13, he has a direct involvement in the PCB’s affairs. Local media last week reported the PCB was in talks with former England coach Peter Moores to join ahead of the World Cup.