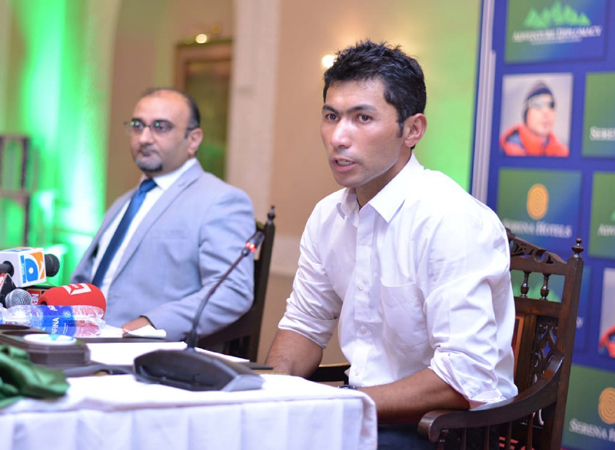 Continuing his #Mission14, Pakistani Mountaineer Sirbaz Khan is set to become the first Pakistani in history to summit more than 8 of the world’s 14 highest peaks measuring over 8000m high.

At a press conference at Islamabad Serena Hotel on Friday, Sirbaz announced his departure for Nepal to attempt Mt. Dhaulagiri, which measures 8187 m (26,795 ft) above sea level and is the world’s seventh highest peak. Dhaulagiri, which forms part of the Himalayas mountain range, is widely known as one of the hardest peaks to climb due to the peak’s steep sides and bitterly cold climate. Sirbaz is however confident of his chances, being on a prolific climbing streak already having summited Mt. Everest (highest peak of the world) and Mt. Annapurna (tenth highest peak) in quick succession earlier this year.

His mission is being sponsored by Serena Hotels, which has been supporting Sirbaz’s expeditions under its Adventure Diplomacy initiative, that aims to foster adventure sports in the country and provide a supportive environment for the nation’s talented sportspeople to flourish.

Sirbaz said he was looking forward to his expedition and reaching closer to the dream of his mentor Ali Sadpara, who had the similar dream of scaling the 14 highest peaks, but tragically lost his life earlier this year during a winter expedition to K-2.

CEO Serena Hotels South and Central Asia Mr. Aziz Boolani said, “Serena Hotels takes pride in supporting climbers like Samina Baig in the past, as well as Sirbaz who made us extra proud by summiting Mt. Everest this year. We wish him all the best for this upcoming treacherous expedition.”