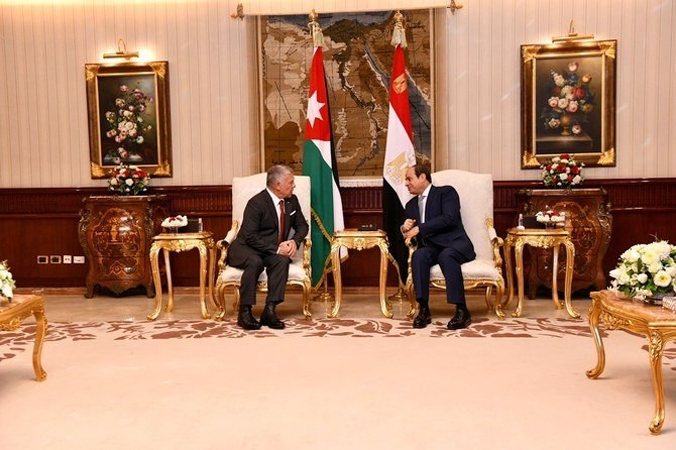 A trilateral summit between the leaders of Egypt, Jordan and Palestine took place in Cairo on Thursday to discuss issues of mutual concern, including the Palestinian cause. Egyptian President Abdel Fattah El-Sisi received Jordan’s King Abdullah and Palestinian President Mahmoud Abbas at the presidential palace. BassamRadi, spokesman for the presidency, said the meeting discussed the latest developments regarding the Palestinian peace process. El-Sisi reaffirmed Cairo’s pledge to help the Palestinians restore their legitimate rights, push for the resumption of peace negotiations and consolidate the truce between the Palestinians and Israel, stressing the importance of unified efforts to achieve a political settlement. He also stressed Egypt’s vision of how to revive the peace process, stabilize the truce in the Gaza Strip, and reconstruct the enclave, adding that achieving the aspirations of the Palestinian people for an independent state will only come by uniting the long-standing divisions between the West Bank and Gaza. President Abbas and King Abdullah thanked El-Sisi for hosting the summit, emphasizing that the meeting represented an opportunity for discussion and exchange of views on how to put the Palestinian issue back on top of the international community’s priorities.