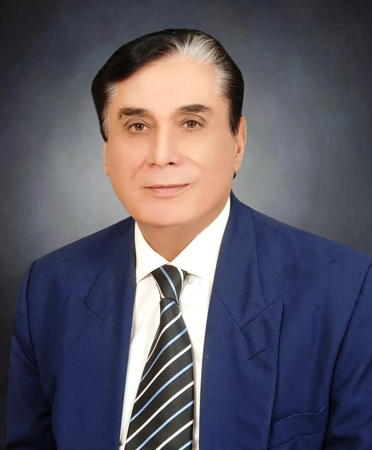 NAB Chairman Justice (r) Javed Iqbal has said that the watchdog has not only apprehended ‘big fish’ for the first time in its history but also brought them to justice as per law.

In a statement, the chairman said references against them in accountability courts speak louder than words and are an ample evidence of the excellent performance of NAB under the present management. He said that NAB is determined bring to logical conclusion the mega corruption cases by utilising all its resources as per law. The initiatives taken by the present management of NAB has started yielding excellent results resulted in enhanced credibility of the NAB from the previous years. He said that NAB has received 496,460 complaints since its inception, out of which 487,124 complaints have been disposed of.

He said that NAB has devised a comprehensive anti-corruption strategy to eradicate corruption through zero tolerance policy which includes awareness, prevention and enforcement. The bureau is focal organisation of Pakistan under United National Convention against Corruption (UNCAC).

NAB is a role model not only for Pakistan but also for entire SAARC countries as NAB had been unanimously elected as Chairman of SAARC Anti-Corruption Forum which was great achievement of Pakistan due to NAB’s efforts. Chairman said that the anti-graft watchdog has signed a memorandum of understanding (MoU) with China to oversee China-Pakistan Economic Corridor (CPEC) projects being completed in Pakistan.

The NAB has also introduced a new system of Combine Investigation Team (CIT) in order to benefit from the experience and collective wisdom of senior supervisory officers with the aim to improve standard of investigations. The establishment of first Forensic Science Lab (FSL) has further improved quality of inquiries and investigations.

The FSL is equipped with facilities of Digital Forensics, Questioned Documents and Fingerprint Analysis which is lending quality and solid evidence in conduct of inquiries and investigations. He said that youth is our future and NAB has signed a memorandum of understanding (MoU) with the Higher Education Commission to make the youth aware of the ill effects corruption at their young age.

NAB) in has set up character building societies (CBS) in various educational institutes. The NAB has set up Prevention Committees in consultation with the concerned federal and provincial governments to prevent corruption and identify shortcomings. According to Gillani and Gallup survey 59 percent people had appreciated NAB’s performance in eradicating corruption.

Reputed international institutes including The Transparency International (TI) Pakistan, the World Economic Forum (WEF), Global Peace, Canada, PILDAT, And Mishal Pakistan have also appreciated NAB’s overall performance in eradication of corruption and corrupt practices. NAB has devised a comprehensive Quantified Grading System in order to further improve the performance of NAB Headquarter and all Regional Bureaus. Under Quantified Grading System, NAB Headquarters and Regional Bureaus are being evaluated on annual and midterm basis at a given criteria which has proved very successful in increasing the repute and image of NAB manifold due to regular monitoring, inspection and implementation of decisions taken by the present management of NAB.