* Ahsan Iqbal asks PTI to prove even 32 paisas of corruption of the alleged Rs 3,200 billion
* Marriyum says mastermind behind Rs 3.3tr projects has been accused of planting Rs 4.5m saplings 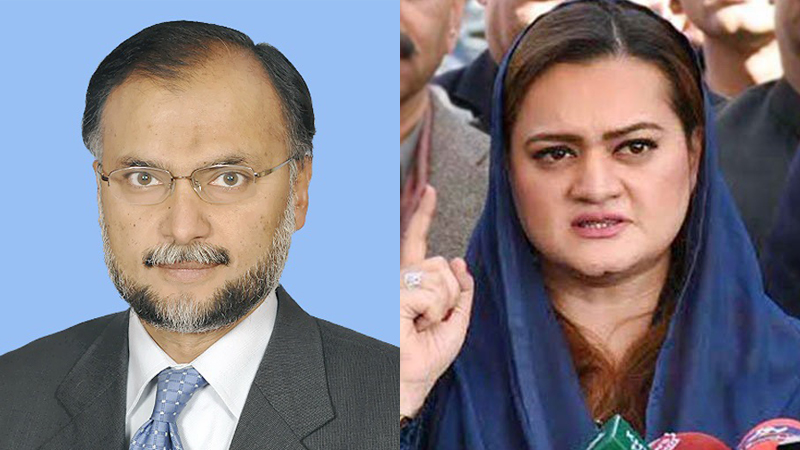 Pakistan Muslim League-Nawaz (PML-N) leader Ahsan Iqbal on Sunday vehemently rejected the corruption allegations against party president and former Punjab chief minister Shehbaz Sharif, challenging the ruling PTI to prove even 32 paisas worth of corruption of the Rs 3,200 billion the party has been accused of misappropriating during its tenure.

“A new scandal has been created against me and Shahbaz Sharif, in which it is said that my brother was awarded contracts,” PML-N Secretary General Ahsan Iqbal told a press conference along with other PML-N leaders, as he criticised the PTI-led government for accusing his party leadership of corruption. “This character assassination drive has been continued for the last three years,” he added.

The PML-N leader said that the ‘incompetent’ rulers open new cases every day to cover up their ‘failures’. He said that the standard of government accountability has now fallen down to Rs 4.5 million in ‘corruption’. Declaring to ‘fight the false cases’, Iqbal further stated that “there were no political prisoners in the PML-N era and no one was subject to political revenge”. He said that it was the PML-N’s mistake that no action was taken against Imran Khan and PTI in their time. He added that PTI leaders “should have been sent to jail and punished”.

“Who says that Imran Khan is honest?” Iqbal asked. “The country’s debt increased by more than Rs1 trillion, people are witnessing the worst inflation,” he said, adding that “Imran Khan is a patron of the mafia”. The PML-N leader proclaimed that he gives more income tax than the prime minister yet lives in a rented house.

She questioned why the mastermind behind projects worth Rs 3.3 trillion has been accused of planting 4.5 million saplings. “This nexus cannot prove a penny’s worth of corruption,” she claimed.

Discussing the performance of PTI, Aurangzeb said that Lahore is ‘barren’ and Punjab has been turned into a ‘heap of garbage’. She further said: “Those who sold off the country are looking into contracts given by Shehbaz Sharif to Ahsan Iqbal’s brother.” She added that those who fill the pockets of the ‘mafia’ are rewarded and ‘after the NAB-Niazi nexus, an Imran-FIA nexus has been established’.

Aurangzeb said that in the last three years, NAB, Imran Khan and Shahzad Akbar tried to prove corruption allegations against PML-N leaders but none were successful.

Following the statements by PML-N leaders, Special Assistant to Prime Minister on Political Communication Shahbaz Gill released a video response. He said that Marriyum Aurangzeb is saying that the PML-N was called out for ‘only 450 million rupees’. “Did the 450 million belong to someone’s father? Did they [the PML-N leadership] bring the money from home that they cannot be questioned?” Gill asked. He added that the “Nawaz Sharif mindset” is still prevalent today.

Gill alleged that the “work of a gardener” was given to Ahsan Iqbal’s brother for hundreds of millions. He asked whether one is to actually believe that Shehbaz Sharif ‘saved Rs1,000 billion for himself and his sons’.

Gill accused Ahsan Iqbal of awarding several contracts to his brother when he was the Minister of Planning. “All these people will have to answer [for their crimes],” he said.