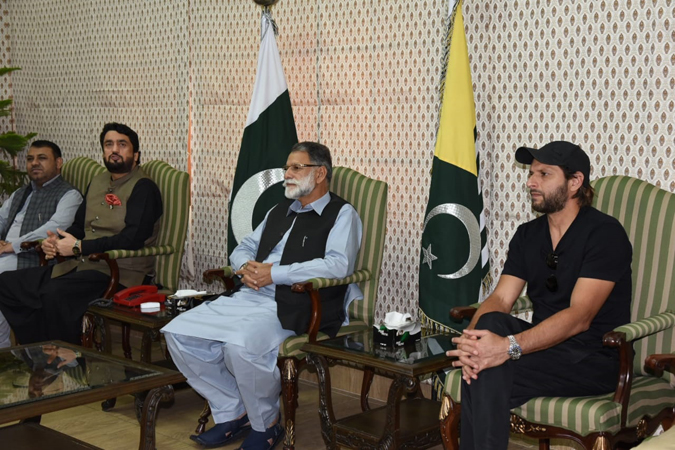 The announcement came during a meeting of AJK PM with Chairman of the Parliamentary Committee on Kashmir Shehryar Khan Afridi and famous cricketer Shahid Afridi here at the AJK PM House. Inspector General of AJK Police Sohail Tajik, Secretary Sports and other high ranking officials were also present on the occasion.

“I myself am a resident of the Line of Control and I know what it takes to challenge the Indian Illegally Occupied regime in Jammu and Kashmir. He said the KPL was a soft power tool to project Kashmir,” he said.

“We have dedicated the KPL to the martyrs of Kashmir. I have directed Principal Secretary to name KPL as Official National Cricket League of Kashmir,” he added. He directed Secretary Sports AJK to develop a state of the art cricket academy in Muzaffarabad and name him as Shahid Afridi Cricket Academy. Hr said that all modren facilities would be provided in cricket academy to harness the skills of Kashmiri youth.

Speaking on the occasion, Shehryar Khan Afridi said that the KPL has helped project Kashmir’s name on the global sports map. He said the successful holding of the KPL was a message of peace and development to all and sundry and all stakeholders shared the fruit.

“Sports and culture help grow a nation and its morale. KPL is the first successful show of Prime Minister AJK. Now sky is the limit to holding such events to help harness the Kashmiri talent,” he said.

Shehryar Afridi said that Kashmiri youth would be provided global platforms. He said that Cricket academy in Azad Kashmir would groom the Kashmiri youth on Cricket, Squash and hockey skills.

Shahid Afridi said that our elders have sacrificed their everything for Kashmir.

“Sports is the best gift to Kashmiri youth. A self-sustainable academy needs to be developed to help benefit the youth of Kashmir. We will provide blueprint of the academy,” he concluded.

Arif Malik, President KPL said that the upcoming KPL would also feature a new franchise, Jammu Janbaz, to pay tribute to the Martyrs of Jammu next year.