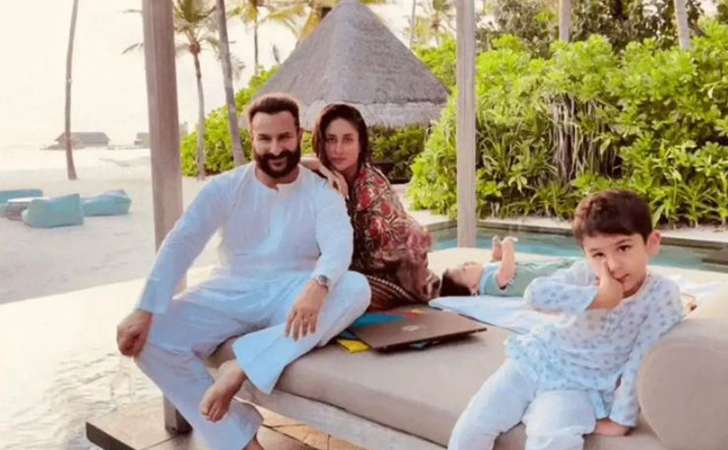 Bollywood actor Saif Ali Khan who turned 51 on Monday will be ringing in his birthday from the tropical island of Maldives with his wife Kareena Kapoor and sons Taimur and Jeh.

In case you were wondering how their exotic celebration is going, Kareena has a picture update for Saif’s fans! The actress, on Saif’s birthday, took to Instagram to share a family picture from the sunny beaches of Maldives.

In the picture, Saif looked dapper in a white kurta while Kareena wore a colourful, printed kaftan. India’s favourite star kid Taimur was seen posing cutely and looking at the camera with an adorable expression. Little baby Jeh was seen resting and lying down next to Kareena on a baby mat.

In the caption, Kareena wrote, “Happy Birthday to the love of my life… To eternity and beyond with you is all I want.”

The actor entered the industry with Yash Chopra’s Parampara in 1993 and then made his name in the industry with films such as Yeh Dillagi, Main Khiladi Tu Anari. Even though his career slightly dipped during the ’90s, he rose back up like a Phoneix and starred in the iconic film Hum Saath-Saath Hain. After that, he gave back to back hits with Dil Chahta Hai and Kal Ho Naa Ho.

More recently, he will next be seen in Bhoot Police co-starring Yami Gautam and Jacqueline Fernandez.

On the personal front, Kareena Kapoor Khan and Saif Ali Khan welcomed their second child together on February 21. Since then there has been immense interest among fans to get a full view picture of the baby and know his name. Earlier, in July Kareena’s father, Randhir Kapoor told a media outlet that the little munchkin is called ‘Jeh’ by his parents.

Jeh reportedly is not the name of the latest addition in the family but a pet name of Taimur Ali Khan’s younger brother who is actually Jehangir Ali Khan.