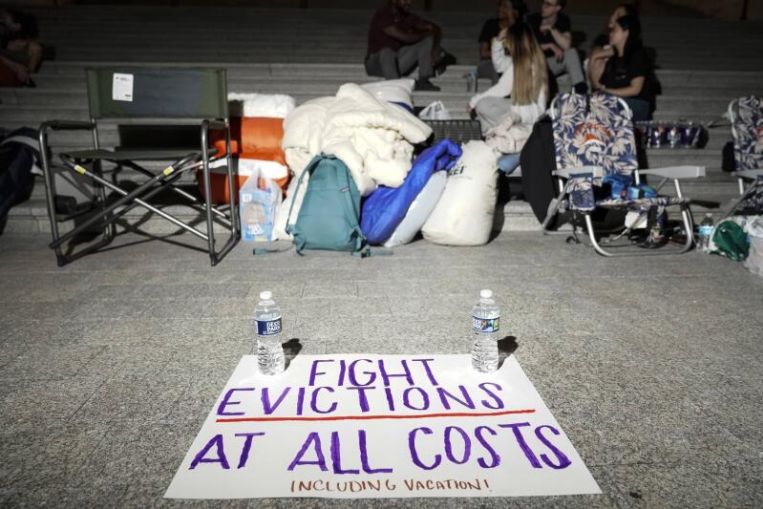 Eviction protections expired Sunday for millions of Americans who could face homelessness within days, triggering a scramble to unlock billions in stalled rental aid and recriminations in Washington.

Renters had been shielded from eviction for nearly a year as part of a government moratorium intended to keep people in their houses during the Covid-19 pandemic. But lawmakers have failed to extend those expiring protections and only $3 billion in aid has reached households out of the $25 billion allotted to states and localities in early February. “We should be compassionate. We should help. And if that money is there, we should use it for its intended purpose,” Democratic Senator Joe Manchin told CNN. Over a quarter of renters are behind in some states, according to the Center on Budget and Policy Priorities think-tank.

Southern states are some of the worst affected, though some 16 percent of US households owed rent — about double the amount before the pandemic. The protections lapsed at midnight on Saturday, two days after the White House announced it would not be legally able to renew the moratorium. Republicans balked at Democratic efforts to extend the freeze through mid-October, and the House of Representatives adjourned for its summer vacation Friday without renewing it. But Democratic Congresswoman Alexandria Ocasio-Cortez laid blame on President Joe Biden’s administration for waiting until the last minute to ask Congress to act — saying it could have done so weeks earlier.

She added it would be unfair to turf people out when billions in aid have not been spent — a total of 46 billion has been approved by Congress — and called for an immediate vote to extend the moratorium. “We cannot kick people out of their homes when our end of the bargain has not been fulfilled,” she told CNN. House Speaker Nancy Pelosi and other senior Democratic leaders also urged Biden to extend the moratorium in a Sunday statement. “Doing so is a moral imperative to keep people from being put out on the street which also contributes to the public health emergency,” they said.

Unlike other pandemic-related aid that was distributed from Washington, it was states, counties and cities that were responsible for building programs from the ground up to dole out help to renters. Samantha Pate and Andrew Martinez are two renters who wonder when their eviction notice may come. Their family of four in the western state of Colorado is eight months behind in rent, roughly $8,000, they told local TV station KDVR on Saturday. Both have been working or looking for work but have been struggling to survive financially. They said they may end up living in tents. “This is not camping for us, this is going to be a way of life,” Martinez said.

The moratorium and other protections prevented an estimated 2.2 million eviction filings since March 2020, said Peter Hepburn, a research fellow at the Eviction Lab at Princeton University. If those renters are forced back onto the market, they will be facing ever higher prices, according to a realtor.com June rental report. Rental prices reached new highs in sections of the country, with some parts of Florida and California seeing over 20 percent price hikes over the previous year. This “is adding to the challenges faced by lower-income Americans as they struggle to recover from job losses and other hardships brought about by Covid,” said Realtor.com chief economist Danielle Hale.