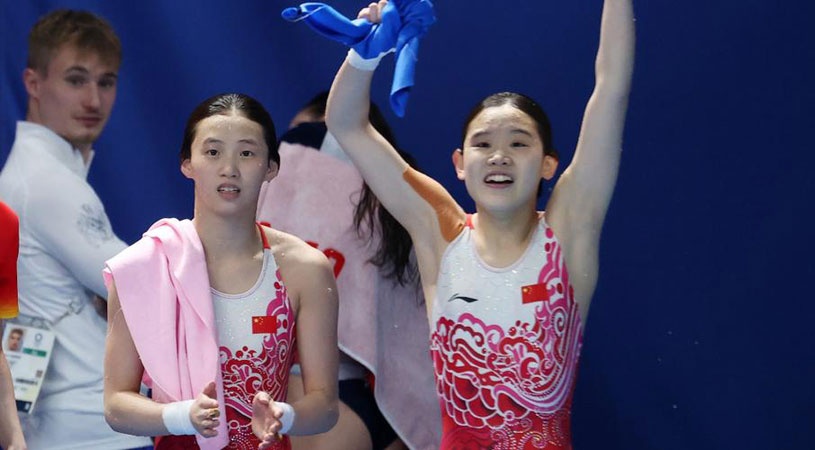 TOKYO: China stretched their remarkable 100 percent Olympic record in women’s synchronised 10m platform diving thanks to two fearless teenagers on Tuesday. China came into the pandemic-delayed Tokyo Games hoping for a clean sweep of diving golds, but they were stunned by British duo Tom Daley and Matty Lee on Monday. Normal service was resumed however as Chen Yuxi, who is just 15, and 17-year-old diving partner Zhang Jiaqi romped to a comfortable gold with 363.78 points at Tokyo Aquatics Centre. The Chinese have won the women’s synchronised 10m platform gold at every Olympics since its debut at Sydney in 2000. Tuesday’s gold was number six in the event. Jessica Parratto and Delaney Schnell of the United States won silver in a distant second (310.80 points), with bronze going to Mexico’s Gabriela Agundez and Alejandra Orozco (299.70).

Asked afterwards if they had felt any nerves at all, the Chinese teenagers turned to look at each other and then said in unison: “No.” But Chen, a world champion in the individual event when she was only 13, cautioned that “I hope we are not one-time wonders. “From a very, very young age I planted this seed and knew this was my dream.” Zhang, world champion in the synchronised platform in 2019, said that being younger has advantages and disadvantages. Canada’s Meaghan Benfeito, who narrowly missed out on a fourth Olympic medal, is twice as old as the Chinese pair at age 32. “We are short and light, and this means that our entry (into the water) is better than the others,” said Zhang. “Our weakness is that we are inexperienced. They have much more experience, we only have one world championship.” China took gold on the first day of diving, in women’s synchronised 3m springboard, before Daley and Lee pipped the Chinese to the men’s synchronised 10m platform crown. That ruined the hopes of the Chinese diving squad — nicknamed the “Dream Team” back home — who had ambitions of carrying off all eight golds in the Japanese capital. At the Rio 2016 Games they won seven of the eight diving titles — Britain took the other.