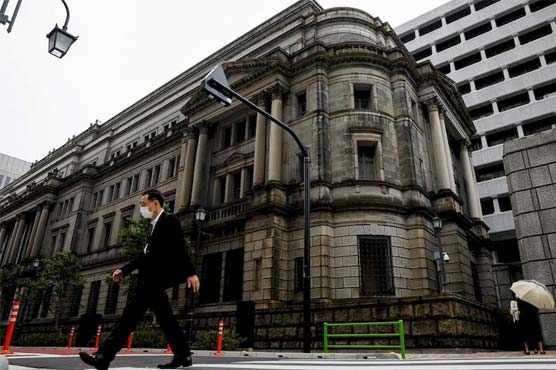 The Bank of Japan on Friday revised down its growth forecast for the current fiscal year and laid out details of its first green fund, announced last month.

The central bank kept its key monetary easing measures unchanged, and maintained its longstanding two-percent inflation target, which remains far off despite years of efforts. In its quarterly report, the BoJ said Japan’s economy would grow 3.8 percent in the current fiscal year to March, trimming its previous estimate of 4.0 percent growth “due to the impact of Covid-19.”

However, it revised up the forecast for the year to March 2023 to 2.7 percent growth from 2.4 percent. It raised its inflation forecast to 0.6 percent for the current year to March from 0.1 percent “mainly due to higher energy prices.” Last month, the central bank announced its first investment fund for efforts to address climate change, as the government works towards its new target of reaching carbon neutrality by 2050. The scheme, likely to start this year, will be a successor to an existing programme aimed at promoting economic growth more generally.

On Friday, the central bank said it would provide green loans at a rate of zero percent, and the scheme would last until the end of March 2031. “Although Japan does already have specific government measures to enhance investment in green initiatives this will represent the first concrete action that the BoJ has taken to actively support steps to tackle climate change,” Naoya Oshikubo, senior economist at SuMi TRUST, said in a commentary ahead of the meeting. Last week, the European Central Bank set a new inflation target and integrated climate change considerations into its monetary policy strategy. The Bank of England also said it would next year test the exposure of Britain’s commercial lenders to climate change risks, under an assessment delayed by coronavirus.