US stocks mostly fall in profit taking after records 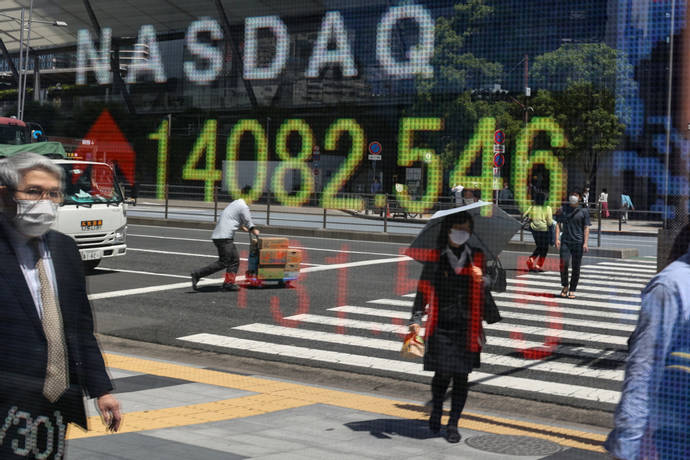 All three major indices had finished at records last Friday and again Monday just ahead of Tuesday’s unofficial kickoff of earnings season. Wall Street has been bullish on the earnings in light of the strengthening US economy. “This could be a classic case of buy the rumor and sell the news,” said Adam Sarhan of 50 Park Investments. “It’s perfectly normal and healthy to see sellers show up after a big move up.” The Dow Jones Industrial Average edged up 0.2 percent to 34,987.02.

But the S&P 500 fell 0.3 percent to 4,360.03, while the tech-rich Nasdaq Composite Index shed 0.7 percent to 14,543.13. Markets kept an eye on the second day of congressional testimony from Federal Reserve Chair Jay Powell, who reiterated the central bank’s plan to maintain stimulus initiatives until the economy fully recovers. New applications for US unemployment benefits fell to 360,000 last week, the lowest level since the start of the Covid-19 pandemic, Labor Department data showed.

China’s GDP growth came in at 7.9 percent on-year in the April to June period, said the National Bureau of Statistics — a significant drop from the 18.3 percent surge in the first three months. However, other Chinese data on retail sales and industrial production came in stronger than expected, somewhat offsetting the weaker GDP figure, analysts said. Among individual companies, Biogen slumped 6.8 percent after a pair of major US hospitals said they would not administer the company’s Aduhelm treatment for Alzheimer’s amid questions over the drug and how it was approved by US authorities.