Queensland bounce back to down NSW and salvage Origin pride 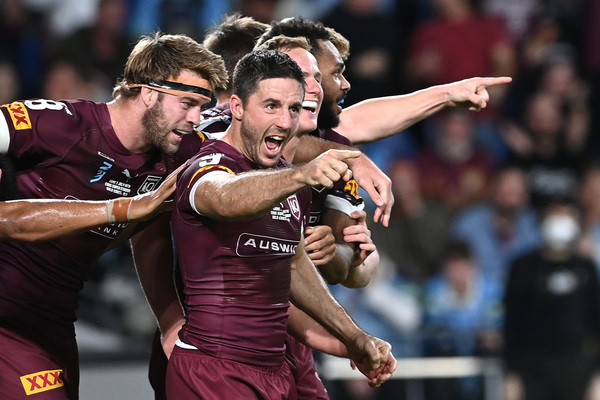 A fired-up Queensland battled back from two heavy losses to down New South Wales 20-18 in the final State of Origin rugby league clash Wednesday and salvage some pride.

The Blues were heavy favourites after making their opponents look like a mediocre club side in the opening two games, which included a record 50-6 walloping in the first meeting. A besieged Queensland fared better in game two, but still crashed 26-0 to lose their grip on the shield they won last year. With only pride to play for on the Gold Coast, they rallied with a much improved performance, showing far more backbone and fight. They went to the break with an 8-6 lead after Latrell Mitchell and Hamiso Tabuai-Fidow bagged tries for NSW and Queensland respectively. A second-half brace from Ben Hunt helped seal the win with Mitchell fluffing a penalty two minutes from time that would have levelled the match. The game was originally scheduled to be played in Sydney, but a worsening Covid-19 outbreak saw it switched to Newcastle, two hours north.

But when fans were barred due to coronavirus concerns, rugby league bosses opted to relocate to the Gold Coast where spectators were allowed, meaning all three games this year were played in Queensland. The Maroons applied early pressure and Valentine Holmes slotted a penalty in the 4th minute, but NSW quickly responded and deft footwork from South Sydney star Mitchell saw him split the defence for the opening try. But Queensland, displaying far more urgency, quickly hit back with 19-year-old debutant Tabuai-Fidow touching down under the posts as they moved 8-6 ahead midway through the half.

NSW needed an immense defensive effort to prevent them scoring again before the break and their efforts paid off when Jack Wighton bagged their second try nine minutes into the second half after throwing a dummy and slicing through. Queensland, though, were not ready to cave in and Hunt burrowed over for their second try and a 14-12 lead then grabbed another as they began finding space. A try on debut from the Blues’ Apisai Koroisau with 10 minutes left set up a nail-biting finale, with the Maroons desperately clinging on.