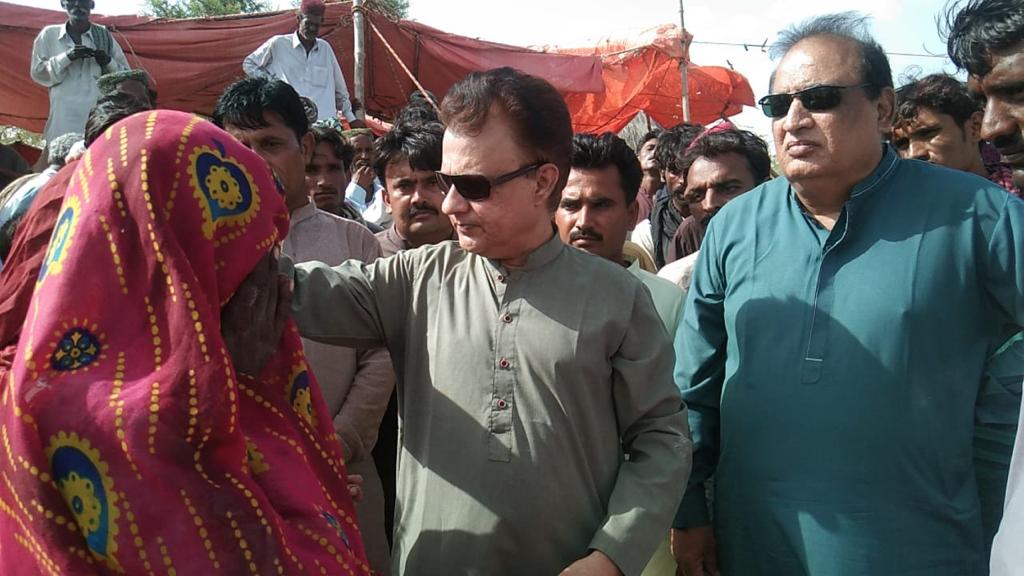 MITHI: The chief of Qaumi Awami Tehreek Ayaz Latif Palijo has said that the murder of the worker Dodo Bheel at the hands of the guards of Sindh Engro Coal Mining Company  (SECMC) has exposed the dangerous  plans of the PPP rulers with regard to resources of Thar and rest of the province. Mr Palejo on Wednesday reached village Aban Jo- Tarr near Isalamot town along with the party workers and condoled with the heirs of the murdered worker .

Speaking to the media persons, he said that it was very tragic that as many as three local Thari  poor workers of the mining company were tortured by the guards of the company for over two weeks in ‘torture’ in the block-2 of Thar Coalfields on the ‘flimsy’ charges of theft but the area police despite the frequent fervent appeals to officials, lawmakers and the protests, no police official bothered to reuse the detained workers.

“The autopsy report issued by a medical officer Dr Imran Ali Jarwar is enough proof of savagery and brutality committed on one of the victims of the brutal torture by the unbridled security personnel” he aded and said that Dodo’s medical report said that he had received as many as 17 fatal injuries with some blunt heavy iron rod.

The QAT leader said that Dodo’s killing should be an eye opener for other Tharis, who were shown the big dreams by the corrupt rulers and greedy executives and officials of the corporate sector of the prosperity and progress of Thar adding he requested Tharis to raise their collective voice against such acts. He alleged that PPP lawmakers from Tharparkar were acting the like ‘paid workers’ of the mining companies and got the peaceful protesters trapped in a quagmire by joining their peaceful protest on the first day, when people taking the body of the deceased had registered protest for the registration of the FIR and arrest of their real killers.

“The next day the same people helped the accused get bail from the court and left people at the mercy of the brute police force, which not only tortured the peaceful protesters including women and children and even journalists” he added and said and asked the people to stop following such opportunities in future.

He said that PPP rulers had always used the poor masses as the firewood to do their dirty politics adding he claimed that those, who had left the poor people from Bheel community alone to face the police  brutalities had no right to call themselves the champions of the democracy and defenders of the rights of Tharis.

He said that with each passing day the officials of the mining companies were forcibly evicting the indigenous people from their centuries old villages without giving them the proper compensation and royalty.

Mr Palijo claimed that under a dangerous conspiracy , the vast areas were being fenced to limit the movement of the people within their own lands and villages and setting up of the torture cells was the proof that the desert region was going to be converted into an occupied temerity.

He said that PPP rulers for earning the money were all set to sell out the lands, waters, islands and other resources without caring a little for the future generations of Sindh.

“The PPP rulers want slaves not educated and talented youths for prosperous  Sindh and that is why they are doing all these tactics to get people killed at the torture cells and police stations” he remarked and asked people to educate their kids for their safe and protected future. He said that people of