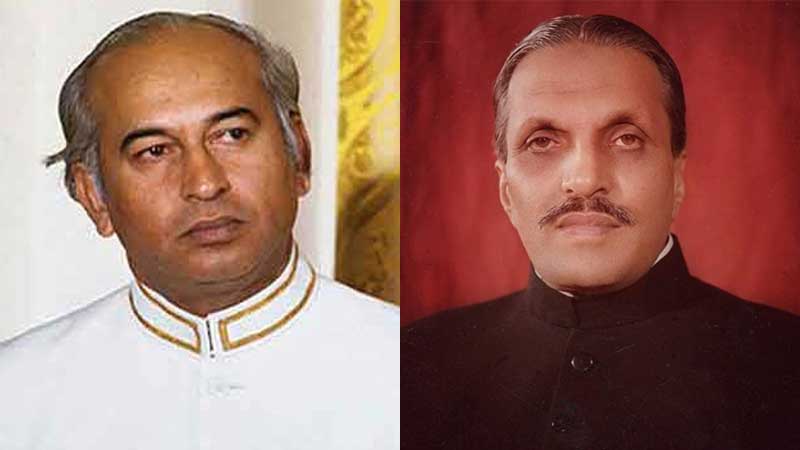 Bhutto rose from Punjab and swept away Sindh and other parts of Pakistan in the 1970 election after he left the Ayub government. He started with a broken Pakistan when he took over after the fall of Dhaka. More than 90,000 civilian and military prisoners were in Indian prisons. The economy had been devoured by the 1971 war. The governmental structure was hardly on a par with established governments around the world.

By and by, Bhutto started from scratch, restored the public morale and started a new chapter in the history of Pakistan.

Over my dead body, said Bhutto.

On the domestic front, he gave voice to the voiceless, and power to the powerless. He gave labourers shares in government corporations.

After Jinnah, and now till date, one can say that Bhutto was a charismatic leader, a crowd-puller, a man with international vision, and a man without any stains of financial or moral corruption.

But Bhutto was not an angel. He has his share of stains; he is associated with the Dalai Camp. Horrible. He made it sure that dissenters either within the party or outside are lodged in the infamous camp. Bhutto made the Federal Security Force (FSF) which could not last after his departure, but the police were used at will to manhandle political opponents during his tenure. Even the sanctity of the parliament was breached several times during his rule when sergeant-at-arms were called in to throw out opposition leaders. Horrible. Several leaders, such as Mufti Mehmood and Mian Tufail, remained in jail for months during his rule. He appeased the religious lots in legislative matters; he looked the other way when the radicalization of society set in, thanks to several legislation done under his rule.

Despite all these ills, Bhutto was a political soul to the core, and all issues could be talked out with him.

Bhutto is often accused of the dismemberment of Pakistan. Though his critics also say that the majority was with Mujibur Rehman but he in connivance with Yahya did not let the transfer of power to happen. This, however, is a very controversial topic.

Then struck Zia and the rest is history.

Zia got rid of Bhutto through courts. He had to do as the American publications wrote that there is one grave and two persons. Judges lowered the coffin of Bhutto at the behest of Zia into the grave but could not kill him.

Zia has also left his own marks on the politics and history of Pakistan. He did everything which could prolong his rule. He used religion as a weapon to stretch his rule but it weakened the country. His legacy goes on in the form of the Pakistan Muslim League-Nawaz and other right-wing parties. The federating units have weakened over the time. The culture of Kalashnikov, heroin, corruption and greed can be rightly called the legacy of Ziaul Haq.

So, in a way, Zia has many heirs: PML-N, radical forces, and so on.

Bhutto’s legacy was carried forward by his true successor: Benazir Bhutto. She was a charismatic and crowd puller as her father. She, however, could not work up to her potential as her hands were tied and she was soon chucked away by terrorist hands.

Now, the PPP is in the hands of Bilawal Bhutto Zardari. He has a great DNA and has potential to make a turnaround in Pakistani politics. But he needs to tread the beaten paths carefully.

Now when it’s the 44th July 5 since 1977, the Pakistani nation has learnt it again that even the worst possible democracy is still better than the dictatorship.