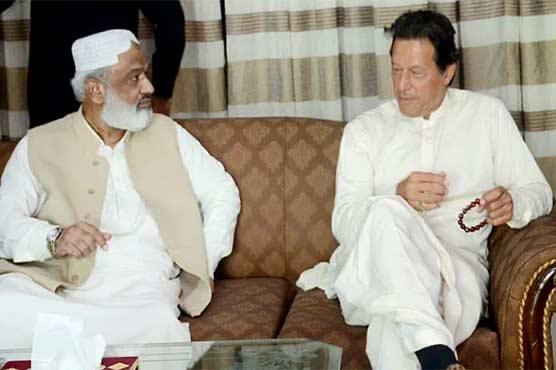 Former Sindh chief minister Dr Arbab Ghulam Rahim formally joined Pakistan Tehreek-e-Insaf (PTI) after meeting with Prime Minister Imran Khan in Islamabad on Thursday. The former chief minister decided to directly join the PTI along with his son Arbab Ibrahim Rahim and was given the task to further strengthen the party in Sindh by inviting the estranged PPP leaders into the fold of PTI.

Arbab Ibrahim’s son who was with him during the meeting when contacted told this reporter that Prime Minister Khan himself had invited them and after hearing them patiently invited them to join hands adding he said they took no time to accept the offer. He said that his father requested Mr Khan to take punitive actions against all those, who were still busy looting the public funds. Dr Rahim during the meeting also informed him about the rampant corruption and the political victimization by the PPP government in Sindh on the political rivals including their supporters in Thar.

“We also appraised him of the police brutalities being unleashed on our supporters by Tharparkar police on the behest of PPP leaders ” he added and informed that Mr Khan welcomed him in the party and hoped that with the joining of Dr Rahim, PTI in Sindh would be further strengthened. To a question whether Dr Rahim was going to be saddled with any important assignment or any position in the Federal government, he said that it was too early to predict the future plans of Mr Khan and my father. Here it is pertinent to mention that a few weeks back Dr Rahim during the press conference had requested Imran Khan to take notice of the registration of the cases and arrests of his supporters by Thar police. Dr Rahim had taken part in previous general elections and then by-polls on GDA tickets but was defeated by PPP candidates both from Tharparkar and Umerkot districts.