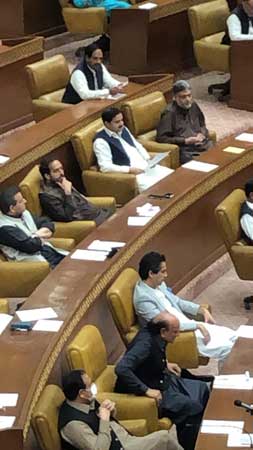 Punjab Assembly on Friday passed the Finance Bill 2021-22 with the majority.

After the session resumed, Finance Bill 2021-22 was presented in the House by finance minister Punjab Makhdoom Hashim Jawan Bakht,for its approval.

According to the Finance bill, the Punjab government had given Rs 51 billion comprehensive package of tax relief for revival of business activities and growth in the fiscal year 2021-22. No new tax has been imposed in the budget and the government has tried to make it a business-friendly budget in the context of Covid-19.

Meanwhile, relief given to about 23 sectors during the last fiscal year would continue, further tax reduction from 16 percent to 5 percent has been extended to 10 more services, and the rate of tax on call centres has been reduced to 16 percent from 19.5 percent.

According to the budget documents, the board of revenue would continue with a 1 percent stamp duty rate with a total impact of Rs 40 billion to boost construction activities in the province and attract new investment to the sector.

Also, the Punjab government has decided to continue with a reduced sales tax rate of 5 percent, instead of 16 percent, on more than 25 services in the next fiscal year. It may be noted that the Punjab government had introduced this rate during the current fiscal, which would continue next financial year as well. These services included small hotels and guest houses, marriage halls, lawns, marquees, tent and catering services, information technology services, tour operators, gyms, property dealers, rent-a-car service, cable TV operators, treatment of textile and leather, commission agents of agriculture commodities, accounting and taxation, auditing, consultancy services, photography and parking services.

The Punjab government has fixed the tax rate at 16 percent for cash payment by restaurants and 5 percent through credit or debit card payments that helped documentation of the economy. Also, the public at large had appreciated the step. Therefore, the Punjab government reduced the tax rate to 5 percent on mobile wallet and payment through QR code.

Under the excise and taxation department, the government would facilitate taxpayers in payment of property tax in two instalments during the next fiscal like the present one. The Punjab government has also restricted the penalty against surcharge on property and motor vehicles to the last two quarters of the next fiscal year.

Earlier, while speaking on the point of order PML (N) MPA Taufiq Butt said that the government has arrested PML (N) workers for criticizing the PTI government on social media. Speaker Chaudhry Pervez Elahi asked the law minister to look into the matter.

The CM appreciated the role being played by Speaker Ch. Pervaiz Elahi to conduct the session in the best of manner. “You have conducted the proceedings in the best of manner and in accordance with the parliamentary traditions,” he added. The CM said that “The cooperation extended by party members and allies was exemplary and I deem it fit and proper to thank you by visiting your chamber,” adding that It’s sanguine that the members took keen interest in the approval of the public-friendly budget. Punjab is moving forward on the road to development.” The past governments left problems for his government, but the PTI government is moving the province forward towards prosperity, he added.

Speaker Ch. Pervaiz Elahi said the assembly is the center of hopes of the people and parliamentarians can win their hearts by focusing on solving public-related problems. I have succeeded in best handling the session due to the cooperation of the parliamentarians, he added.