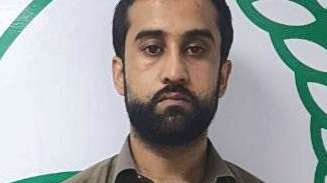 A district and sessions court in Peshawar handed a death sentence to the main accused Mujahidullah Afridi in the Asma Rani murder case.

District and Sessions Judge Ashfaq Ta announced the verdict after examining evidence and hearing both the prosecution and the defence.

The court acquitted two accused Siddiqullah and Shahzeb due to lack of evidence of their involvement in the case.

In 2018, a third year student at Ayub Medical College, Asma Rani, was shot dead in January at her hometown in Kohat. She was allegedly murdered for refusing the marriage proposal of the accused.

Soon after the murder, the accused fled to Dubai and his name was placed on Interpols most wanted people’s list. He was arrested in Dubai and brought back to Pakistan in March, 2018.

As per Asma Rani’s family she was returning home with her sister in law in a rickshaw and was shot thrice by Mujahid Afridi, who was waiting outside their house. She was taken to the hospital where she succumbed to her wounds.

Police had registered an FIR of the case on the complaint of brother of the deceased, Muhammad Irfan, under Section 324 and 304 of Pakistan Penal Code.