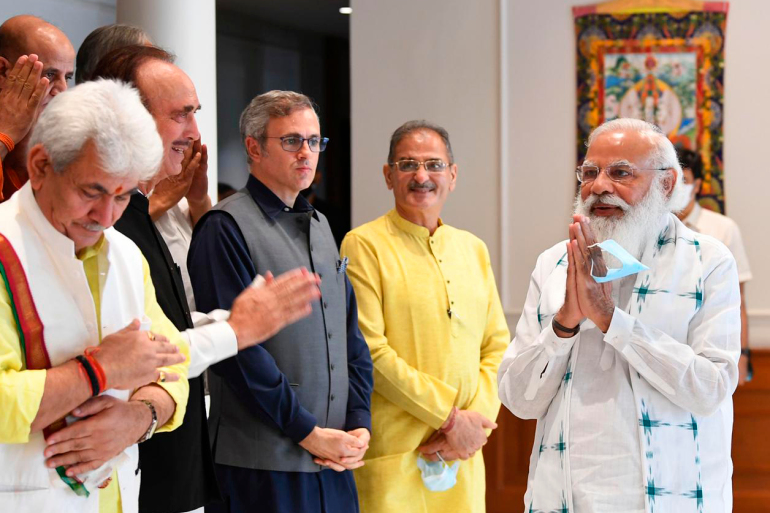 Indian Prime Minister Narendra Modi on Thursday met with Kashmir’s leaders for the first time since the restive region’s semi-autonomy was revoked, as he called for measures to speed up elections for the territory now under direct rule.

Modi’s Hindu-nationalist government moved to bring India’s only Muslim-majority state Jammu and Kashmir under greater central control in August 2019, splitting it into two territories — Jammu and Kashmir, and Ladakh — and detaining scores of local politicians. The government also ended Kashmir’s special autonomy status, which it said was a necessary step for the region’s development and for ending a three-decade armed rebellion that has left thousands of mostly civilians dead.

The meeting in the capital New Delhi was an “important step in the ongoing efforts towards a developed and progressive” Jammu and Kashmir, Modi tweeted late Thursday. “Delimitation has to happen at a quick pace so that polls can happen,” he added, referring to the redrawing of the boundaries of assembly seats to represent population changes. According to local media, some 14 leaders attended the talks, including former Jammu and Kashmir chief ministers Mehbooba Mufti, Farooq Abdullah and his son Omar — all detained in the months after autonomy was revoked. After the meeting Omar Abdullah questioned why delimitation was necessary.

The push appears to be aimed at increasing the number of seats in the Hindu-majority Jammu region to give Modi’s Bharatiya Janata Party an edge in local polls. “We told the prime minister that we don’t stand with what was done on 5th August 2019,” Abdullah told Indian news broadcaster NDTV, referring to the revocation and echoing other local parties’ call for the return of Kashmir’s autonomy. “We’re not ready to accept it. But we won’t take the law into our hands. We’ll fight this in court,” he added. The Himalayan region has been divided between India and Pakistan since 1947, with many in the region demanding an independent country.