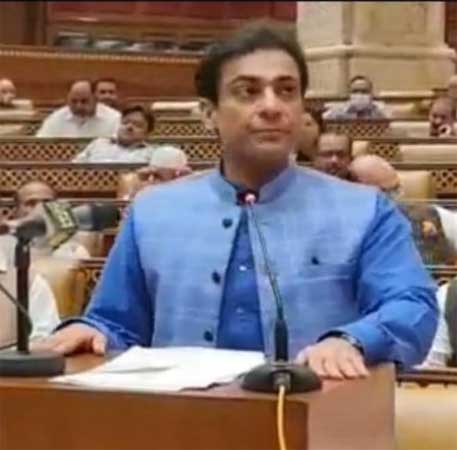 Contrary to the pandemonium that erupted in the National Assembly during the budget speech of Leader of the Opposition Shehbaz Sharif, sanity prevailed in Punjab Assembly on Thursday during the opening speech of Opposition Leader Hamza Shehbaz.

There was no major interruption from the treasury benches during the speech of Hamza Shehbaz as all MPAs from both sides of the aisle listened to his speech attentively. The credit for the peaceful environment in the House largely went to Speaker Chaudhry Pervaiz Elahi who played the role of a bridge between two arch-rivals and brought them on the negotiating table.

Ahead of the session on Thursday, a meeting of business advisory committee was held under the chair of Elahi in which it was decided that peaceful environment will be ensured in the House during the speeches of opposition leader and the chief minister. “You all should ignore what happened in the National Assembly the other day. Everyone is now focusing this House and you all should behave patiently,” said Speaker Elahi, before the start of opposition leader’s speech. He also warned to expel any MPA during the session who was found involved in the ruckus during the speeches of Leader of the House or Leader of the Opposition.

In his speech, Hamza Shehbaz severely criticized the economic policies of both the federal and Punjab government while avoiding personal attacks on anyone. In his marathon speech, opposition leader discussed the issues of economy, health, education, foreign debts and law and order. “Who used to say that I’ll commit suicide before going to the IMF,” asked Hamza and said that the government wasted much time in taking any decision regarding the IMF. These rulers made the word ‘loan’ as an abusive word but one thing is clear that the loan is not as much bad as they used to portray. Loan is not bad if it is used in productive way. First, they were reluctant to get loan from the IMF and then we all saw that they imported a Finance Minister from the IMF, Hamza said sarcastically. “The foreign debt was 25,000 billion when we left and now it is at 48,000 billion,” he said. He further added that the health, education, law and order, road infrastructure, agriculture and all major sectors have been ruined due to the flawed policies of the government. The result will be the same when largest province will be run from Islamabad through remote control, he added.

According to Hamza Shehbaz, it was the PML-N government that did not give any subsidy on sugar owing to which his relatives faced loss of Rs.1billion but on the other hand the PTI government gave Rs.3billion’s subsidy. It was PMLN government that spread the road’s net at 8000 kilometre with cost of Rs.86billion but the PTI government did nothing in this regard. Making a comparison of PTI’s budget with the budget presented by PML-N in 2018, Hamza said that we gave development budget of 635 billion but now the development budget is 560 billion. We gave 228 billion to South Punjab but now 179 billion was given to that part of the province. He also made a comparison of prices of basic edible items including sugar, cooking oil, flour and tea between PML-N tenure and PTI’s regime.

At the end of his speech, Hamza Shehbaz also urged the Speaker to make functional the standing committees of Punjab and constitute the Public Accounts Committee I as well. As many as 26 bills were passed without any consideration in the standing committees and history will not forgive us, he said. “We are ready to play role of a responsible opposition for the betterment of this province,” Hamza concluded.

Responding the opposition leader, Minister for Industries Mian Aslam Iqbal grilled the opposition on Model Town incident as it was the anniversary of the sad incident that claimed 14 innocent lives. Some MPAs of PML-N tried to respond Aslam Iqbal but senior parliamentarians of opposition stopped them. Mian Aslam Iqbal highlighted the PMLN government’s flawed polices and losses which the Pakistan faced. He admired the PTI-led budget and termed it as hope of the poor masses.

Earlier, the session started after the delay of more than two hours from its scheduled time with Speaker Elahi in the chair. As the proceedings of the House started, the PML-N’s Malik Ahmad first moved a privilege motion lamenting that it is embarrassing for assembly and the democracy norms that a Bill relating to Punjab Emergency Council Bill 1122 was passed but the concerned department is reluctant to form its rules. At which the Speaker Elahi admitted “I was defeated but those who did not want to see 1122 a successful institution stood winner”. At which provincial law minister Raja Basharat tried to control the situation but all in vain. Speaker made clear that he will not let the matters run in such a way if things remained unchanged. However, Speaker announced himself as the head of a special committee to monitor the whole matter and summoned the meeting of said committee next week. PML-N’s Rana Mashhood and PPP’s Syed Usman Mehmood also delivered speeches. The session will resume again on Friday (today).