PML-N resorts to ‘physical assault’ under garb of Shehbaz’s speech in NA: Farrukh 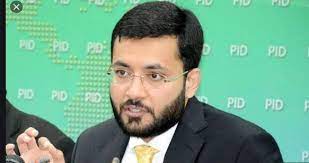 ISLAMABAD: Minister of State for Information and Broadcasting Farrukh Habib said on Wednesday that the Pakistan Muslim League-Nawaz (PML-N) had resorted to ‘physical assault’ under the garb of Opposition Leader Shehbaz Sharif’s speech in the National Assembly (NA) today.

In a series of tweets, he said the party had earlier refused to develop consensus on the code of conduct with a committee formed by the government for the purpose.

Instead of listening to the opposition leader’s speech, he said the PML-N Members of National Assembly (MNAs) started attacking the government’s members with ‘bottles’. As a result, the ruling party MNA Akram Cheema sustained an eye injury after a bottle struck him, he added.

Earlier, another female MNA of Pakistan Tehreek-e-Insaf Maleeka Bukhari became the causality of yesterday’s incident in the NA.