* Fawad says PML-N is 'Modern East India Company'
* Opp won't be allowed to talk in parliament if it can't listen to speakers from treasury
* G-20 has suspended repayment of Pakistan's $3.7bn loan till yearend 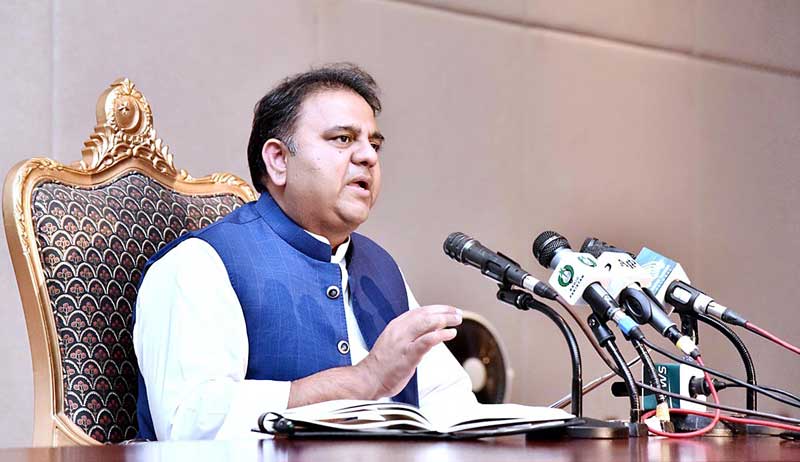 Addressing a press briefing after the federal cabinet meeting here, the minister said the Federal Investigation Agency (FIA) has sent four questions to the PML-N leader Shehbaz Sharif to answer Rs 25 billion money laundering he committed from two sugar mills. He said the entire nation is looking at the matter of accountability as if it is some kind of a joke. “The schedule for hearing of cases isn’t issued despite the passage of up to six months,” he said. “I have an earnest request to the judiciary to hear such cases on day-to-day basis as the public wants result,” he added.

Fawad said those who used to play local games in Gawalmandi are now watching polo games in London. “Any person who has understanding of the polo games, knows that how much expensive it is to have a ‘polo-poly’ in London,” he said. “It is a despicable act,” he said, while recalling the requests made by the PML-N leadership for leaving the country on medical grounds. He said the properties of the PML-N leadership are in London and there is a need to evaluate the taxes being paid by them in Pakistan and the UK.

Fawad said the cabinet discussed the ongoing budget session of the parliament and viewed that the government wants a thorough debate on the budget and would listen to the constructive criticism. “But, criticism and insult are two different things,” he said, adding that the opposition under the garb of criticism is trying to insult, which is not acceptable in any case. He said an unpleasant attitude was shown towards the government by the opposition. As planned by Opposition Leader Shehbaz Sharif, PML-N MNAs were given the task of sloganeering and misconduct. “We will never allow anyone to do such things in the Parliament.”

He said the PTI government believes that if the opposition parties have to speak, they would must have to listen to the treasury benches’ point of view first. “It cannot happen that they [opposition] keep speaking for two to three hours, but start misbehaving and hooliganism on the government’s turn,” he maintained. “The opposition has some misunderstanding that whatever it does is in line with the parliamentary norms, and whatever the government does is non-democratic. There will be tit-for-tat, you [opposition] will not be able to talk, if you disrupt the speakers from treasury benches,” he asserted.

Responding to another query, Fawad said the Pakistan Muslim League-Quaid has never boycotted cabinet meetings and all the allied parties are united under the leadership of Prime Minister Imran Khan. He said as per the decision of the Supreme Court, development funds cannot be given to the members of National Assembly or provincial assemblies.

Fawad said as per the law, the National Accountability Bureau (NAB) is bound to give decision in the corruption cases within 30 days. The minister said he was in favour of dialogue among the state institutions as it would be beneficial for the country. He said that the government time and again asked the opposition for dialogue on electoral reforms, but the response is lukewarm.

The minister said the G-20 countries have suspended the repayment of $3.7 billion loan till the year end, bringing a good news for Pakistan’s economy. “The suspension of loan, which was liable to be paid instantly, is the good news for national economy,” he said.