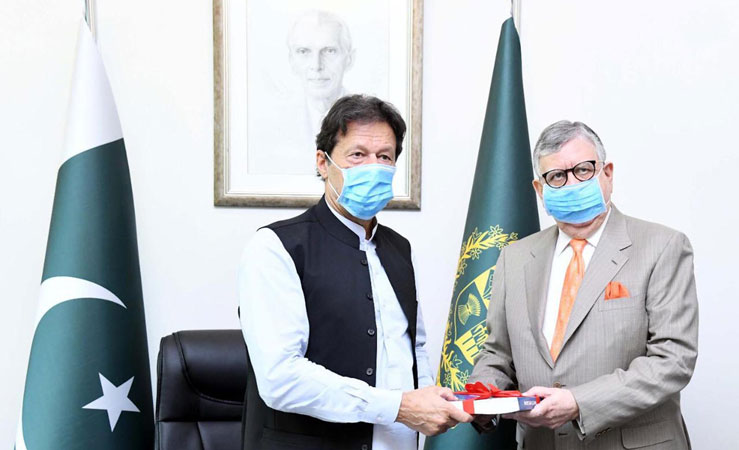 Addressing the launching ceremony of Pakistan Economic Survey for the fiscal year 2020-21, the minister said growth projection for the current fiscal year was 2.1%, while the world financial institutions including the World Bank and International Monetary Fund (IMF) had forecast even lower growth. However, the minister added, due to the timely interventions and prudent policies by the government, the GDP witnessed remarkable growth of 3.94%. “In terms of growth rate, Pakistan is ahead of targets set by the government as well as the IMF for the outgoing fiscal year,” he added.

The minister said the government provided incentives to manufacturing sector and facilitated businesses by providing incentives in gas and electricity besides making interventions in agriculture sector, which helped positive development towards growth. He said the Large Scale Manufacturing (LSM) witnessed growth of 9%, while agriculture sector also grew by 2.77%, whereas the overseas Pakistani workers’ remittances crossed $26 billion and are expected to go up to $30 billion. He said the government had tackled the Covid-19 pandemic in a wise manner, due to which, Pakistan had been witnessing growth at a time when the world economies were facing difficulties. However, he said Pakistan became net importer of food items including wheat, sugar, palm oil, and pulses which had put burden on current account balance, however added that the country’s exports were witnessing growth.

He said although inflation had gone up, but as compared to other world countries it was comparatively low in Pakistan adding that the government was making all out efforts to bring it down and provide relief to the common people. He said Covid-19 had badly hit the working population as the number of working people brought down from 57.74 million to 35 million, depriving over 20 million from their jobs and livelihood. However, he said policies introduced by the prime minister to reduce the after-effects of the pandemic, the number of working population started to enhance and reached again up to 50 million by October 2020, hence helped in regaining the economic activity in the country.

In order to sustain the local economy, he said the government has taken timely decisions and announced special incentives for different sectors of national economy including manufacturing, construction and agriculture sector. Due to incentives of the government, large scale manufacturing industry grew by 9%, agriculture sector witnessed 2.77% growth while the major crops such as wheat, rice, sugarcane and maize production touched the higher numbers and bumper crops were produced during the season. Meanwhile, worker remittances observed unprecedented growth and reached to $26 billion, he remarked.

The finance minister said the increasing trend in foreign remittances had also helped overcoming the negative impacts of current account deficit, which was swelled mainly due to increase in the imports of food commodities including wheat, sugar, edible oil and others. He said foreign exchange reserves with the State Bank of Pakistan also increased from $7 billion to over $16 billion, while $1 billion was deposited through ‘Roshan Digital Account’. He said the government had striven to fulfill the requirement of Financial Action Task Force.

He expressed optimism on increasing revenue collection of Federal Board of Revenue, saying that it touched Rs4.2 trillion during last 11 months, which was 18% higher as compared to the collection of corresponding period of last year.

About the debt, Train said debt payment increased from Rs1,500 to Rs3,000 as on total debt was stood at Rs 31 trillion out of which Rs 25 trillion was local debt and Rs12.5 trillion was foreign debt, adding that in 2020-21, an amount of Rs1.7 trillion was increased in the public debts. He said increase in debt during current financial was half compared to the last year.

To a question, the minister added that the IMF wanted us to raise power tariffs besides increasing Rs150 billion worth of personal income tax in the upcoming budget. “We however have conveyed to the IMF not to put more burden on the salaried as well as the poor people,” he said, adding that the IMF wanted to bring stability in the economy first and then move towards the growth.

With respect to circular debt and capacity payments issues, the minister said this issue was very complex and may take some time of around six to seven years to be resolved.